THE REINCARNATION OF PETER PROUD GETTING REMAKE 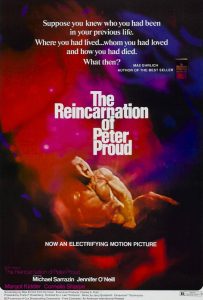 David Goyer’s Phantom Four Films is tackling a remake of the 1975 psychological horror movie The Reincarnation of Peter Proud, with Sean Durkin on board to write and direct.

In the original movie, which was directed by J. Lee Thompson and based on a novel by Max Ehrlich, college professor Peter Proud begins experiencing flashbacks of an earlier life. He finds himself mysteriously drawn to a place he’s never been to, but which seems familiar, where he soon finds his previous incarnation’s wife.

This project will be the first film to come out of a multi-year, first-look deal that Phantom Four Films has inked with Village Roadshow. Daniel Ostroff, Michael Gaeta, and Alison Rosenzweig will produce.