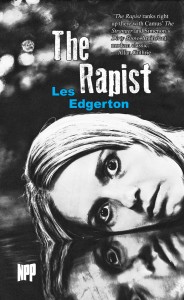 The Rapist is the story of one Truman Ferris Pinter’s final hours before the death penalty is executed for his crimes, the rape and murder of Greta Carlisle. Told in first person, we ride the wave of opinion and conceited thought of a thoroughly dislikeable man with not a shred of restitution or an ounce of regret.

A man who finds the concept society defines as rape to be incredulously wanting, she was a common whore not capable of being raped and a man who thinks it well within his rights.

Prisoner 49028 has a plan for death, he believes he can escape its clutches, it’s just unfortunate that we have to wait as long as we do to see him get his just deserts.

A more self-righteous, egotistical sociopath you’ll not meet again and it’s the dark, troubling journey of someone who believes himself worthy of applause, who goes into great detail to explain his actions, his thoughts of rape as a crime before God and a man who thinks himself superior, and infinitely more intelligent than anyone else.

The Rapist is clearly a controversial piece of fiction by a very talented writer, full of wonderful prose and inspired feelings of hatred. The subject matter was probably not the best introduction to Les Edgerton and I felt the story got bogged down a little towards the end with the dreams of a nutcase and his flying act.

I would certainly read more from this author and this story more than battered my emotions with a 2’ by 4’.