The Poster for Honeyspider is the Stuff of Nightmares

If you’re afraid of spiders then you might want to give this post a miss, because it gives a rather terrifying look in to the world where nightmarish spiders haunt waking lives. Spiders are scary on their own, but when you mix them in to the world of the occult, things get even more petrifying. 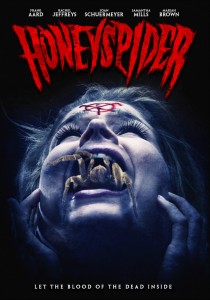 It’s Halloween day in 1989 and college student Jackie Blue wants to enjoy a quiet birthday in the midst of a chaotic semester at school. Her friend Amber has other ideas and persuades Jackie to come to the annual Monster Mash party on campus after her shift at the local cinema. As murder plays out on the silver screen during the theatre’s Halloween night Horrorthon, Jackie falls under a strange spell, all while a mysterious stranger watches over her every move. As the night unfolds, Jackie slowly unravels and everyone around her is turning up dead. Jackie finds herself helplessly trapped like prey in a spider’s web, and all she can do is try to survive the night!

Check out the trailer and poster below, which show a – gasp! – Tarantula in someone’s mouth. The film comes from director Josh Hasty and writer Kenny Caperton, marking their first collaboration on a feature-length film. The mix of slasher tropes and elements typically seen in religious horror films looks very interesting, setting Honeyspider up as the next truly terrifying indie flick.