Whilst best-known for her recent stint as Gia Moran in Power Rangers Megaforce, rising star Ciara Hanna is one of many actresses to get the James Cullen Bressack bug. Her first collaboration with the 23 years young filmmaker was in Pernicious, all set to release next Friday, June 19, but she obviously saw something special in him as she went on to appear in Blood Lake and is currently shooting Limelight with him.

With Pernicious releasing next week, SCREAM’s Howard Gorman caught up with Ciara to find out what it was that drove her to take on the gruesome role of Alex in Pernicious and what is is about Cullen Bressack that keeps her coming back for more and more juicy genre roles… 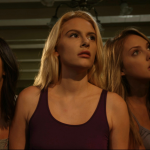 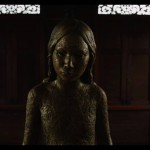 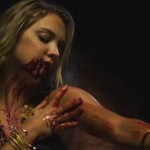 SCREAM: What made you jump at the chance to get bloody with James Cullen Bressack?

Ciara Hanna: Pretty much I saw a casting for it online and applied based on the synopsis of the film. Then James reached out to me and I had an interview with him and he had me read the script and I just pretty much fell in love with it. We worked really well together off the bat and that’s how it all started.

Were you aware of James’ work before, like Hate Crime which has caused quite the commotion over here in the UK?

I was not. I had no idea who he was when I met him. Afterwards I looked him up and saw a pretty large resume for such a young guy.

You must have had a great time playing Gia on Mega Force Rangers but what was it that inspired you to try your hand at a role in a particularly violent horror movie? Was it a conscious decision to try and break away from your Power Rangers character?

It wasn’t that I initially thought I needed to do something drastically different from Power Rangers. I just kind of naturally fell into it. My favourite genre has always been horror and I’ve always loved being scared, even as a young child. I just fell into doing horror really and I’ve done Pernicious with James and also a more campy horror film, Blood Lake with him too. I just love the special effects that are involved and these are really interesting to film because you have to really think how to create these creepy mindsets.

One of the biggest challenges I think you found on set was the fact you played the youngest girl of three, essentially because you are the oldest in your own family so you found it tricky to play this naive Alex character.

It was so tough because I’m naturally more of a leader because I’m an oldest child and oldest cousin. I’ve always been the oldest in my family so I’m naturally in charge of everyone. As a result, to be this carefree, naive person was very tough for me so I had to sit down, take a deep breath and let other people be able to nurture me and take care of me. It was difficult because I’m usually the nurturer. It was certainly a release and something different for me to try.

How was the experience with your co-stars? Did you need to work a lot together in pre-production or did you click instantly with everything falling quickly into place?

We all clicked very well. We all have very different personalities but we all connected. We didn’t really have much time for preparation as we pretty much met in Thailand. I met Jackie in the plane on the way over and we sat next to each other on the way over. Then I met Emily in Thailand so we really didn’t have much time to connect and build a relationship for the film. But, thankfully we all got along pretty well and we are all still really good friends so it really worked in our favour in the end.

The shoot must have been a nightmare as you arrived amidst some severe floods. For you, what were the biggest challenges you encountered over there?

We pretty much had at least three back-up plans for each day of shooting. The first day we went in and saw where our house was and it was a beautiful location. Literally a couple of days later there was water right up to the entrance of the house so we couldn’t even walk to it. Thankfully, the Thai crew were very prepared and were able to build a walkway on stilts so we were able to get to the house. So the initial scene, which we were supposed to be pulling up to the house in a taxi in, had to be changed to us coming in on a boat to the dock that the crew built. Every day was definitely a different challenge but we all made it through.

Talking of the crew, how did you manage out there as I think most didn’t speak English and you even had translators translating translators.

Oh yeah, three quarters of our crew spoke only Thai and we barely even knew how to say thank you in Thai so we had pretty much no idea what was going on. We had to go off body language and by how they were moving and their facial expressions. We had to physically talk to everyone and explain exactly what we needed and it was a question of just being really patient with people. I also give all props to our translators because they had to do double the work having to communicate with everyone because that was definitely one of the challenges and I was so surprised it worked out so well. 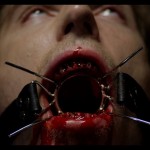 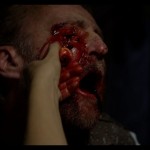 James calls Pernicious his most violent film to date. Tell me how much you loved (or hated) getting your hands dirty in the violent scenes with special effects wizard Jerami Cruise.

Oh I LOVED THAT! I’d never worked with special effects like that before. I had only worked with the monsters and sparks and stuff like that in Power Rangers but I’d never worked with blood and all the fake limbs and everything. Jerami is such a creepy guy but I loved him. He is such a genius when it comes to special effects. He knew what to do to make everything so realistic. He knew exactly how far blood should spurt naturally, he knew where every vein is in your body, which ones leak more. He’s like a special effects creepy horror doctor. I love him to death and would work with him a million more times.

Even though the effects were so practical was it a shock to see yourself so violent and covered in blood when you came to see the finished film?

When you’re on set you kind of clear your mind and just do it. You don’t really think about it until you get playback and that’s when you’re like, “Woah! That’s what I just did?” I think the only thing that freaked me out a little bit on playback were the torture scenes. All of that was really intense and probably the most interesting to watch on playback as I saw myself in this weird possessed mindframe. To watch that kind of thing on screen REALLY creeps you out.

The second half of the film dives headfirst into Thai folklore and the supernatural. Did James and yourself do a lot of background research into that?

Yes, the thing about James is that he is very good at educating us about different parts of the script and he’s very passionate and wants to make sure we understand everything. He took special time with each and every one of us to make sure we were educated on the storyline and what we’re feeling and how we’re supposed to feel. So we definitely got an education on the Thai tradition and what to expect. It did actually creep me out when I discovered that the statue in the film is actually a real thing that they did with babies because I originally just thought it was something that James had made up. The fact that it was actually real made the film ten million times even creepier.

Also, being in a Thai home with real Thai traditions meant we had to take off our shoes before we ever went inside, we couldn’t say certain things and we had to do a whole prayer ceremony before shooting as the whole crew and the film had to be blessed first. Everything was super traditional and, coming from America where the we just kind of do things, if anyone walked in the house with their shoes on we had to come out and take them off and the house had to be blessed again. It was a really big thing over there.

So if you had to be so respectful of the traditions over there, did they appreciate you going over there to shoot a gruesome tale based on their folklore and traditions?

They definitely accepted it. I know there were some issues regarding certain scenes inside the household because they saw it like bringing demons into the house and all that stuff. But they knew what they were getting themselves into and we tried to be as respectful as possible. It was certainly a challenge to still be respectful of their traditions because, even though WE know this is just a movie, to them it’s real and it’s a big deal.

Just to finish off, I know you have since filmed a few things with James but I believe you are also sticking in the horror business with another film directed by Darren Denison called Vagary.

Yeah, that’s an interesting film. Actually, that was one of the first films I filmed but it’s been a long process. I haven’t even really seen it but I know it’s there and I know they are still working on it and I know the director, Darren is very particular so it’s been a kind of give or take process with that project. It has actually been one of my favourite roles to play and it’s interesting in that I filmed it so long ago but it’s still one of my favourites. It definitely is an interesting story where our friend gets possessed and starts killing people although he doesn’t know he’s doing it. It’s actually kind of the same thing as Pernicious.

Thanks so much Ciara and we wish you the best of luck.

Awesome. Thank you so much for the interview and I look forward to doing more with you.

We’d like to thank Ciara so much for talking with us and we’ll leave you with the latest trailer for Pernicious, out June 19th, don’t miss it…