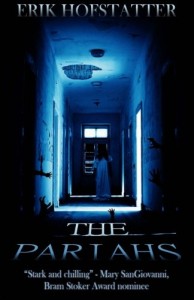 The Pariahs by Erik Hofstatter is an intriguing novella set in the years following the nuclear disaster at Chernobyl. The story starts with the kidnapping of two children, Demyan and Akilina by Kalashnikov wielding men in radiation suits. Descendants of the disaster both children live with the abnormalities caused by radiation poisoning.

Seventeen years had passed since the disaster, there had been rumours of the government taking children but after all this time? They wake in a cell, in the cold hell of Siberian. Separated, frantic with worry, the older brother Demyan is desperate to see his sister again, to make sure she’s ok.

Someone in the cell below starts to communicate with Demyan, conversations of the damned, a girl named Taisiya who claims she was born in this prison and can take him to see his sister, help him escape. The children are unwittingly part of an experiment in a biomedical research facility, in a setting that screams horror, friendships are formed but who can you really trust? Your family? Those you rely on with no question, or new friends? Trust no-one.

The same timeline is told from three perspectives, one after the other so there is an air of repetition as the story threads its path via each protagonist. The story is well written, a little predictable to some extent, heartless and touched with a sadness built from despair and false hope. There was also an incredulous moment when a confession of betrayal is quickly forgotten and trust established a little too easily, or maybe not as regards the end result. The story offers little character depth which in my opinion would have enhanced the story significantly considering the harsh lives the children must have lived, the balance is a difficult one to obtain but would have made you care about the children and their plight.