The Outbreak Begins in a Clip from Dead Rising: Watchtower 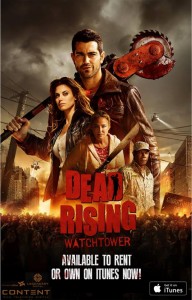 A new clip has been released for the film adaptation of Dead Rising and it shows the beginning of an outbreak. It shows Jesse Metcalfe’s character Chase caught in the carnage at a hospital when various patients start turning in to zombies. It’s not long before the infection spreads outside the hospital walls, with Chase’s colleague Jordan also drawn in to the bloodbath.

Dead Rising is a hugely popular game and the adaptation of games into films, and vice versa, may not always go well. From Super Mario Bros to Silent Hill, all game genres have suffered from poor films. However, amongst the Bloodrayne there can be a Resident Evil or Wreck-it Ralph, proving games can be adapted strongly. It probably won’t be a classic, but, hopefully Dead Rising: Watchtower will be able to present an entertaining, gory film to please fans of zombies, as well as the game.

Synopsis:
Dead Rising: Watchtower follows Chase Carter (Jesse Metcalfe), a reporter trying to make it big – but the pursuit of his career-defining story leads him into the heart of a zombie-infested warzone. East Mission, Oregon is locked down after police find the bodies of what appear to be victims of a zombie attack. Zombies are not a new phenomenon, but outbreaks are uncommon. Past incidents were only just contained in time and the country is nervous. When two ambitious Net 2.0 reporters, Chase and his colleague Jordan, get inside the quarantine zone to report on a large group of civilians trapped in an inner city dome stadium, they realise they’re waiting for a rescue that isn’t coming.”

Dead Rising: Watchtower is out now on DVD and Blu-ray.