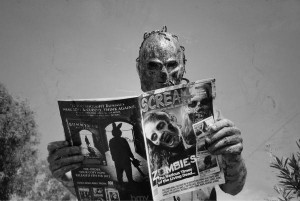 We just got sent this rather enjoyable picture of the villainous Marcus Miller aka The Orphan Killer! The Orphan Killer is a tour de force murder flick that defies classification. A limited test release of The Orphan Killer was distributed through Facebook last year. The response from horror fans worldwide was phenomenal and the movie was soon hitting the festival circuits and picking up numerous awards.

The film follows the life of two children who become wards of the state in New Jersey after a home invasion results in the murder of their parents. Having witnessed the murder, Marcus is forever changed. The siblings are sent to a Catholic orphanage where Audrey is subsequently adopted and Marcus is left behind. He suffers abuse at the hands of the caretakers and as a punishment is masked and exiled. Never forgiving his sister for abandoning him, Marcus returns to his sister’s life many years later in adulthood, still masked, wanting to teach her a lesson.

A sequel is already in the works and if a huge amount of blood, guts and violence is your cup of tea go and check out the films website at: http://www.theorphankiller.com