Opening Scene Of The Gallows Will Give You Goosebumps 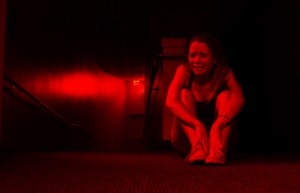 It’s not long until the release of New Line Cinema’s latest endeavour in found footage horror with The Gallows. To get us all excited for a visit from Charlie, we’ve been given a short clip, which is the very first scene in the film and there’s something very chilling and disturbing about it.

Directed by Chris Lofing and Travis Cluff, The Gallows focuses on the devastating and paranormal affects, which happen after a student is accidentally hung during a school performance. Originally the film was being produced by Jason Blum and distributed through Blumhouse although it’s now changed and will be released by New Line Cinema.

The Gallows will be released July 10th 2015, so not long until Charlie comes to play.

Students at a small town school believe they are doing a good deed by honouring the death of another student, 20 years previously, by resurrecting the high school play that sadly led to his demise. Whilst the students prepare for the anniversary show, they begin to realise they might have just made the worst mistake of their lives.