The New Poster for The Hive is a Scream 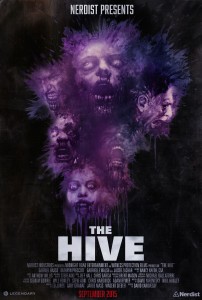 David Yarovesky is the director behind The Hive, a film which is being described a mix of Memento and Evil Dead. I am instantly sold with that in mind. It’s a post-apocalyptic love story that looks beautiful, yet terrifying – take a look at the trailer below and you’ll see what I mean.

Synopsis:
Adam, a teenage camp counsellor wakes inside a boarded up cabin, with absolutely no memory of who he is or where he is. The only clues as to who he is and what’s happening are messages Adam has scrawled for himself onto the walls and disturbing changes to his physiology. As he begins to piece together the events that led him to his strange imprisonment, he realizes that the only memories he does have are not his own, and they may be the key to his survival.

The poster is a purple explosion of fear and screams which encompasses the beauty and terror within The Hive itself. There is no word on a UK release date yet, but you lucky devils in the USA can catch The Hive when it is released on 14th September 2015.