We already know that Slice is going to be a mocking comedy, but now we have a new poster to share with you and it pokes fun at Dominos Pizza in the UK. The last poster was more for US readers, so it’s nice to see we can join in the fun too. 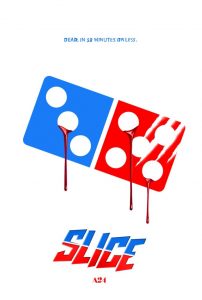 In Slice, a city where ghosts and humans cohabit, a pizza delivery driver is murdered on the job and the residents wonder who’s guilty: ghosts? Drug dealers? Werewolves? Ghouls? We’ll have to watch the film to find out.

Slice will be released this year courtesy of A24; the distributor behind some of the best modern genre films, including Green Room, The Witch and Under the Skin – so, we can’t help but be immediately intrigued by Slice.

Remind yourself of the creative and fun teaser for the film below.