As a festive treat, director Rob Zombie has shared a virtual holiday card over on Instagram wishing us a “scary Christmas” from “all of us down at 1313 Mockingbird Lane.” 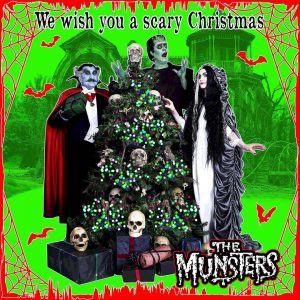 The card shows off the central cast of his upcoming movie, The Munsters, including Daniel Roebuck (Final Destination) as Grandpa Munster, Jeff Daniel Phillips (The Lords of Salem) as Herman Munster, and Sheri Moon Zombie (House of 1000 Corpses) as Lily Munster. The film will also star Richard Brake (3 from Hell) as Dr. Henry Augustus Wolfgang and Sylvester McCoy (Doctor Who) as Igor.

No word on a release date just yet, but production is currently underway.