Synopsis:
After responding to a help wanted sign outside the local mortician’s office, a young woman (Caitlin Custer) asks funeral director Montgomery Dark (Clancy Brown) to tell her scary stories about how some of the corpses he’s attended to died. Dark is more than happy to oblige… 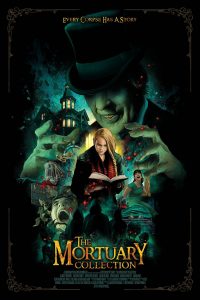 The dead have many tales to tell—and those tales might be weirder than you expect in The Mortuary Collection, the feature debut of writer-director Ryan Spindell.

An anthology film that bears more resemblance to the old Amicus portmanteaus than to modern offerings like The ABCs of Death and V/H/S, The Mortuary Collection has a little something for everyone. It’s individual segments touch on a variety of sub-genres—a little Lovecraftian tentacled terror, a smattering of social commentary, a riff on the babysitter-in-peril urban legend—all while blending black comedy and over-the-top gore with some genuinely heartfelt and even heartbreaking moments.

Horror anthologies are only ever as good as the sum of their parts, but The Mortuary Collection is one of the few that managers to be greater than them. This is helped largely by the fact that a singular writer and director is at the helm, giving the film a cohesive identity and visual style that is rarely present in anthologies with many cooks in the kitchen. While the various tales take place across several decades, the gorgeous production design and rich colour scheme help to tie the piece together, hiding the seams just as tidily as Dark prepares the dead for their final public appearances.

Spindell also has a strong grasp of when to tell a quick, simple story and when to let a segment breathe. The first of the four interior narratives, concerning a thief who gets her comeuppance, doesn’t need to be anything other than a breezy tale to set the stage, while the story of a husband (a superb Barak Hardley) making the impossible decision of what to do with his catatonic wife is allowed to play out to its devastating conclusion. What’s more, while each segment works as a standalone piece, they also fit neatly together to tell a larger story about morality and consequences. While many anthologies treat their connective tissue as a mere afterthought, The Mortuary Collection ensures it has meat.

Clancy Brown carries the weight of the wraparound narrative, delivering an exceptionally compelling performance as the creepy funeral director and primary storyteller. If this film had been made fifty years ago, the role of Dark would have been played by the likes of Vincent Price, and Brown does the old titans proud. His performance is complemented by Caitlin Custer’s wryly energetic turn as the young job candidate, and the pair are good enough to make you excited to see what will happen after each segment ends.

Possibly the next great horror anthology, The Mortuary Collection is stylish, atmospheric, and above all, entertaining. The stories it’s telling might not be the most original, but it tells them so beautifully that you’ll hardly care.