Synopsis:
A drifter with powers takes on an evil doctor and his crew of telekinetic assassins. 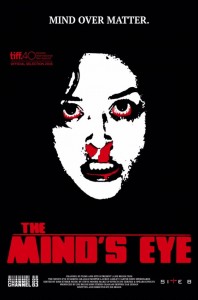 Director Joe Begos returns to the director’s chair with his second feature The Mind’s Eye. Showing an appreciation for the works of David Cronenberg and John Carpenter, Begos has delivered a science fiction thriller jam-packed with early nineties nostalgia. Relying solely on practical effects, a marvelous synth-led soundtrack and over-the-top gore, The Mind’s Eye is an unstoppable monster that will please genre fans gloriously and the end result is one hell of a mind-blowing experience.

The Mind’s Eye tells the story of Zack Conners (played by Graham Skipper), a man with the ability to move and destroy objects with his mind. After being taken into custody by the police, his abilities attract the interest of Dr. Slovack (John Speredakos) and Zack is admitted into his institute under false pretenses. Struggling to overcome the effects of the drugs used to suppress his telekinetic powers, Zack teams up with a fellow telekinetic Rachel (Lauren Ashley Carter) to stand up against Slovack and his telekinetic assassins.

Paying homage to classics of the caliber of Scanners and The Fury, Begos has once again delivered with The Mind’s Eye. The plot might lack much in terms of substance but Begos recovers with some pretty awesome set-ups that make the film worthy of your time. But what I really liked about the film was Steve Moore‘s score. The Mind’s Eye benefits from his luscious synth soundtrack which helps Begos emulate Carpenter’s work perfectly and it really helps cement the early ’90s feel of the piece.

Moving on, in the lead role, Graham Skipper does a grand job in carrying the film. As Zack, he brings a likeability factor to his character that makes it easy for audiences to warm to him. But, unlike Chloe Graze Moritz’ open-mouthed acting to ‘enhance’ her telekinetic performance in Carrie, Skipper nails the intensity in the moments when his character is demonstrating his ability. Joining him is Lauren Ashley Carter who is equally as good. She matches Skipper beat for beat and perfectly balances the vulnerability and strength of her character beautifully. 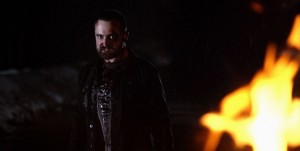 It’s fun, creative, edgy and kinda awesome to watch. Even Josh Ethier (Almost Human), Jeremy Gardner (The Battery) and Matt Mercer (Contracted) put in appearances, as does the almighty Larry Fessenden. The cast do a fantastic job in elevating the standard of the film in the rare moments when the overall pace begins to stumble. That said, Begos bounces back and delivers a wholly satisfying finale that you won’t want to miss.