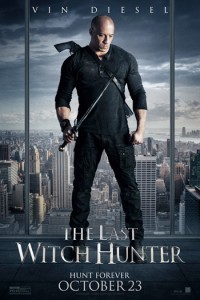 Synopsis:
Kaulder (Vin Diesel) is an ancient being known as the ‘Witch Hunter’. Cursed in medieval times to live for eternity it has been his job through the ages – with the assistance of a secretive church organisation known as the ‘Axe and Cross’ – to hold the powers of witches at bay, and protect the human race from their evil powers. Now, in modern day New York, it appears the time has come for Kaulder and his associates to face ‘The Witch Queen’ – the head of the witches – in a battle which will determine once and for all, not just their fate, but also that of the entire human race.

The Last Witch Hunter – directed by Breck Eisner, written by Cory Goodman, Matt Sazama and Burk Sharpless and featuring Vin Diesel, Michael Caine, Elijah Wood and Rose Leslie is a film which really shouldn’t be as good as it is. So many of its constituents – if taken on their individual merits – would normally be the type to make true film lovers run in the opposite direction. With blatantly obvious reliance on CGI, characters who wouldn’t look out of place in one of those supernatural high-school dramas popular amongst prepubescent teenagers, and a plot which jumps back and forth through time in an effort to beef out a back story aimed at giving life and substance to the story’s central hero, this is clearly not a film which aims to be taken seriously.

The truth though, is that the result is actually quite fun. The plot may be paper-thin – this is a Vin Diesel film after all. But when you have a medieval witch finder who cannot die, condemned to wander eternity, ridding earth of any witch – of which there are apparently quite a few living alongside us – who steps out of place, who needs depth? Here we have a modern day New York – where Kaulder has set up home to fight the forces of evil – beautifully pristine in a clinical, big budget fashion, and where he lives in a multi-room duplex in the famous San Remo building overlooking Central park: how come all ancient heroes seem to live in unbridled luxury when they make it as far as the twenty first century? Kaulder himself also gives the classic witch hunter appearance a refreshingly contemporary edge. Gone are the leathers, cloaks and boots usually associated with this type of character. Instead Kaulder is dressed in an array of high collared shirts and edgily cut overcoats – though these are as likely designed to make the most of Diesel’s pumped-up physique as for any aesthetic reasons. 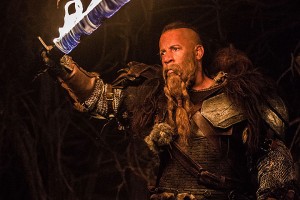 And that, more-or-less, is it. You can’t help but feel that the action or character driven plot threads are there simply to serve as a lead up to the inevitable showdown between Kaulder and his arch-nemesis, The Witch Queen (Julie Engelbrecht). However, with some spectacular fight scenes, as well as a giant mechanical, scorpion-like monstrosity, which guards the way to an underground dungeon where all the ‘bad’ witches are imprisoned, you hardly have time to catch your breath, let alone complain about the film’s lack of profundity.

Ok, so it might feel the movie has outstayed its welcome by the end of its hour and forty six minute running time: it could easily loose twenty minutes without any detrimental effect. The central villain of the piece – The Witch Queen – is also somewhat one dimensional, given little screen time to develop any persona which could elicit strong feelings from the viewer. However, if honest, this film is really a Diesel vehicle and, as with most of his films, he is the star to whom everything, and everyone, else takes a backseat. This, despite having two major names – Caine and Wood as representatives of the church, there to assist Kaulder in his fight against evil – alongside him in supporting roles. Unfortunately – in the case of the superlative Caine – and fortunately – in the case of the consistently stiff Wood – relatively little is seen of their characters other than at the beginning and end, and intermittently throughout the action.

Instead, the real support for Kaulder comes in the form a good witch called Chloe, played by Downton Abbey actress Leslie in her first big Hollywood outing. As capable as Diesel of fighting her corner when it comes to the film’s final Armageddon’esqu showdown with The Witch Queen, Leslie is as at home handling the action scenes as she is cutting her opponents down to size with sharp one-liners. On the strength of her performance here, you can only hope that this will be the first of many major screen outings for the young actress who cut her fantasy teeth in 2014 in several episodes of that other cult TV series, Game of Thrones.

There is next-to-no gore in the film, with most of the violence playing out in a typically antiseptic, PG manner. Even so, the result is an arresting diversion, a darkly atmospheric alternative to the slew of clone-like superhero films due to saturate our screens in the coming months. 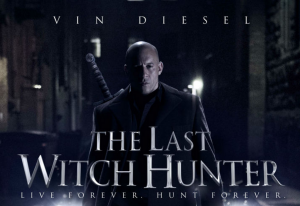 SPECIAL FEATURES:
For a mass market DVD / Blu-ray release, there are some surprisingly good extras here. As well as the standard scene selection option, deleted scenes and commentary by director Breck Eisner, there is also a behind-the-scenes documentary ‘Crafting the Magic: The Last Witch Hunter’ including interviews and input from various cast and crew, giving insight into the inspiration and processes involved in the production of the film.

The highlight of the Special Features however must be ‘The Origins of Axe and Cross’, a series of animated shorts produced by Deviant Art. Narrated by Michael Caine and brought to violent life in effectively sparse style by animators August Florén, Meredith Nolan, Austin Hillebrecht and Robertas Nevecka and illustrator Gediminas Skyrius, the two minute films – with evocative names like ‘Before Mankind’ and ‘Witches Live Amongst Us’ – give background on the main film’s characters and themes, and are well worth watching before embarking on the movie itself. 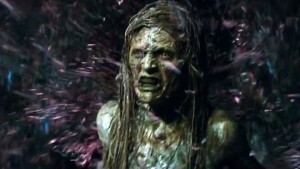 The Last Witch Hunter is out now on Digital HD and on Blu-ray and DVD, courtesy of Entertainment One.