The It Trailer is Here, and it’s Glorious

Well, it’s (or rather, It’s) here, and boy howdy it doesn’t disappoint. The excitement building around the first trailer for this year’s adaptation of Stephen King’s It has been of the levels usually reserved for the public’s first taste of a new Star Wars film. There was even a teaser for the trailer, for God’s sake. Coverage has been across the board, from horror sites to mainstream news outlets. And this is for a horror film.

The two-and-a-half minute trailer for what is now officially called It: Part 1 – The Losers’ Club gives us some genuinely scary glimpses of Pennywise and several flashes of moments straight out of King’s 1986 best-selling classic, as well as – unexpectedly – a nice little moment of physical comedy early on. It doesn’t show too much, but does give fans a lot to chew on, as we embark on the agonising wait for that September release date. 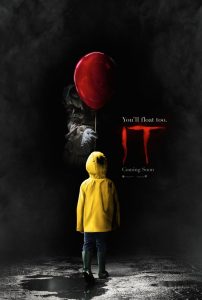 The first film will focus on The Losers’ Club as children as they take on the ancient evil in clown guise, with the second film depicting the friends reuniting as adults to kill off the entity once and for all. Part 1 sees Stranger Things’ Wolfhard again sent back to the ‘80s, bringing forward the narrative from the book, which began in the 1950s.

It: Part 1 – The Losers’ Club will be fucking up cinema audiences from September 8th.