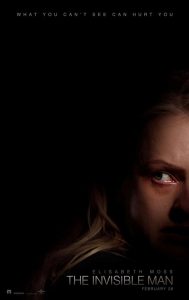 What you can’t see can hurt you. That’s what the poster for Leigh Whannell’s The Invisible Man warns us—and the first trailer (below) confirms it’s true.

Inspired by James Whale’s classic 1933 movie of the same name, which was an adaptation of H. G. Wells’ 1897 novel, Whannell’s new take stars Elizabeth Moss (Us) as Cecilia, a woman trapped in a violent, controlling relationship with a rich and brilliant scientist (Oliver Jackson-Cohen). Shortly after she escapes his clutches, he seemingly commits suicide, leaving her part of his vast fortune. But Cecilia suspects his death was a hoax—and as a series of deadly coincidences start plaguing her life, she must prove she’s being haunted by someone nobody can see.

Aldis Hodge, Storm Reid, and Harriet Dyer also star in the film, which was written, directed, and executive produced by Whannell. Jason Blum and Kylie du Fresne are producing.

The Invisible Man sneaks into theatres on February 28th, 2020.