This September, Stephen King brings us a new 576 page thriller, THE INSTITUTE, a classic story of good versus evil.

Luke is a smart boy. At age 12 he’s ahead of his class and already admitted to two of the nations top universities. Luke is also telekinetic. Sometimes objects around him mysteriously move on their own. This is a power shared by many other children across the globe, as well as telepathy, that interest those who run The Institute, a top-secret government-like facility deep in the Maine woods.

Children such as Luke are kidnapped and brought to The Institute where their powers are studied, and most often strengthened under extreme measures of torturing experimentation. When they cooperate, they are awarded small tokens, and when they don’t, unspeakable things happen to the children. Those who deem fit for the next step are sent to Back Half of The Institute and are never seen again. In order to avoid Back Half, the young genius Luke and a band of fellow captives must fight back along with some small-town South Carolina residents and fellow powerful children around the globe. 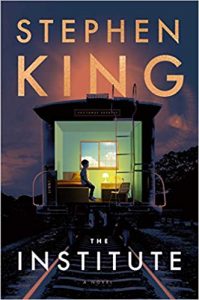 While reminiscent of telekinesis and telepathic powers exhibited in famous King works THE SHINING, FIRESTARTER and CARRIE, children in THE INSTITUTE remain unrelated if only in that their powers are again used here for the battle against evil.

THE INSTITUTE is one of the most brutal pieces of fiction Stephen King has ever written. There are scenes that will leave you with an unforgettable feeling of unease as some of the most powerful and loveable characters King has ever created come to life and then fight for their lives. Easily one of King’s most terrifying thrillers with splashes of sci-fi and suspense. Another finely crafted epic, the likes of which only Stephen King can produce.