The How To Save Us Interview: Jason Trost Lays Down the Rules

With the film all set for a limited theatrical release this Friday, June 5, SCREAM’s Howard Gorman caught up with Trost to find out what drove him to tackle a genre he had never dealt with before and how he achieved so much on such a limited budget… 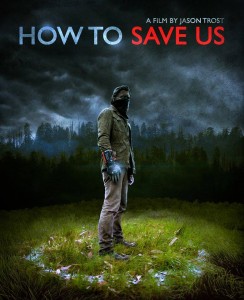 SCREAM: This is your fourth film now and so far you have always been the director, writer and star? What’s with all that? Are you a complete control freak or is there more to it than that?

Jason Trost: I think it’s kind of a blend of a control freak and the fact it was a lot cheaper to have me do all those things. When I don’t charge myself then God knows how far I can stretch the budget.

It’s also your first venture into horror territory. Is it true that video games played a big part in motivating you to write this script?

Definitely. I have always been a big fan of the Silent Hill and Resident Evil video games growing up and I always wanted to make a movie like that. I was sick of not seeing anything like those games so I thought it was about time to make one.

Absolutely. I’ve been so sick of where the horror genre has gone. When I grew up with horror movies they were more horror movies like John Carpenter’s The Thing or The Shining or The Omega Man. Also, one of my favourite books is I Am Legend and what I liked about all these things is that they are horror but you are more scared by the environment and the atmosphere as opposed to some weird torture porn with some scantily clad women running around. Basically I just wanted to go back to what worked 30 years ago and try that out as opposed to what’s been exhausted in the current market.

Without spoiling anything, the backbone of the story focuses on the lead character and the trials and tribulations of his family which you take to supernatural proportions. Why did you decide it best to “keep things in the family”? 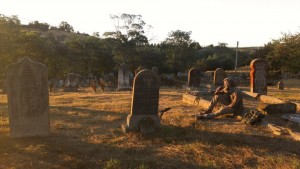 My prime incentive for having the family as the main focus was the fact that although what we see in films often comes across as goofy science, if you ground everything with something that is super universal then you are able to keep hold of the audience for longer. If I’d come up with a non-relatable narrative I think people would start poking holes in the crazy and goofy ghost stuff that’s going on. At the end of the day, everyone relates to family issues no matter how big or small. I feel that that is the biggest anchor point for any audience member and helps keep people invested.

I loved the rules you came up with to keep yourself safe from the supernatural. Are they all just your own inventions or did you base them on anything?

There’s a lot of stuff from my childhood that I’m obviously paying homage to but most was me sitting down and imagining what I could do if there was a ghost apocalypse. I actually had the ideas for the rules way before I had the idea for the movie. I knew I wanted to do a post-apocalyptic movie with these rules and I crafted the story around that. But scientifically and logically I just thought, “Wouldn’t it be neat if these were the ways you could hide from ghosts?”

Sound obviously plays a major part in any movie but you can tell you really went to town when selecting your score and the sound effects in How To Save Us. What was your decision to have the protagonist walking around with a radio playing folk music for example?

Well that was based upon a story a teacher used to tell me about when he would go out into the desert and these ghost radio waves would bounce around. He said sometimes he would hear addresses from World War II or music from back then that would just tune in. It was such a weird thing so I went in and looked it up and realised that it was a real thing and my teacher wasn’t crazy. So I used that idea to come up with the soundtrack of the movie but using ghost waves that are just cutting in and the frequency is completely tuned into our epicentre. I thought it would be really neat and creepy.

And what made you head all the way over to Tasmania to shoot the film given such a tight budget?

Well it actually doesn’t cost as much as you’d think but it’s just so pretty over there. The geography changes every few miles so it was possible to make the movie look huge. Just by driving a few miles down the road it made it look like you were on a different side of the planet. We only had a four person crew there so we weren’t having to pay much to get out there. Another good thing about Tasmania is that they were very open to us filming because other places can be very hard on low budget movies. The people out there couldn’t have been nicer and they were so providing and it was just an awesome atmosphere.

The other reason I chose Tasmania was because I felt that post-apocalypse films look destroyed or ugly so I wanted to show people how pretty the planet would be without us and I thought that has a lot more to say than just “barren landscape number 25.” 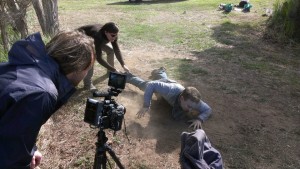 You might have only had a skeleton crew but the cinematographer is a real pro, Phil Miller who has worked on things like The Vatican Tapes and the recent Nightmare on Elm Street remake.

Yeah he was great. We work really well together and we have some of the same sensibilities and we have a pretty strong work ethic which helps. A lot of time when you are dealing with DPs they don’t really have a work ethic and they kind of just want to get comfy sitting behind a monitor somewhere. Phil couldn’t be more the opposite because he comes from a Grip background so he actually pushed me more to get better shots. We really challenged each other and that was great because otherwise this movie would have never been finished.

And how did you score Tori Letzler (‘American Horror Story’) for the score?

I’ve known her for years and she would always tell me that she scored movies and asked me to help her out. It was one of those things where I was in LA and it’s like everyone says they do everything. But then one day she finally let me listen to her music and when she did I was like, “Holy shit! I’m an asshole. She is amazing!” Then I just had her come on and it finally worked out and we had a good rapport because she is a friend and we are both super music nerds and we totally agreed on everything.

Are you still planning to go ahead with your rumoured FP trilogy?

I honestly have no idea. I have written the sequel so we’ll see. I would love to but the first one was exactly the opposite of a financial success so it’s really hard to convince all those people to come back and do it again and there are so many moving parts with that one. We’ve talked about actually finishing it off as a graphic novel trilogy as it might be more fun. We just don’t know. It’s a big, big pain in the ass but we would love to but it’s unfortunately not all up to us.

And similarly I think you are planning a sequel to All Superheroes Must Die.

The answer to this question is a little clearer. It looks like I may actually start filming that this summer. I’ve found a way to make it super small and super different from anything else. It was a combination of just getting screwed over by politics on that sequel and me just being completely sick of superhero movies because a thousand have come out in the past few years. So I found a way of making a superhero movie that has never been done before so that’s intrigued me again and I might just jump into it.

Thank you so much for your time Jason and the very best of luck with How To Save Us.

Great. Thanks for supporting the film, Howard.

We’d like to thank Jason for talking to us about his venture into horror with How To Save Us and we’ll leave you with the trailer for the film: