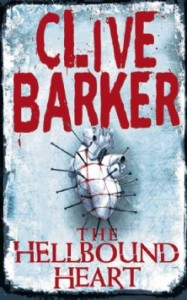 May 2015 will see the return to horror of both one of its masters and one of its most iconic denizens of hell. Clive Barker’s Scarlet Gospels sees the long awaited comeback of Pinhead from the Hellraiser series along with private detective Harry D’Armour.

So it’s fitting to go back to where it all started and The Hellbound Heart.

The Hellbound Heart starts with Lemarchand’s box and Frank’s desire to solve the intricate puzzle and in turn find the promised new world, a province infinitely far from the room in which he sat, toying as the music plays. He had meticulously prepared, every part of the invocation ritual observed and now he was to finally set eyes on the Cenobites, theologians of the Order of the Gash. Summoned from their experiments in the higher reaches of pleasure and that is what he asks for, pleasure.

Not as he’d dreamed though, the collision of sensuality and pain were too much and his mind teetered on the brink of madness. He’d been deceived, with no way back to his life or so he thought.

Forward to Frank’s brother Rory and his wife Julia, moving into the house that Frank briefly occupied and followed by the inexplicably devoted Kirsty, a close friend of Rory. Julia had a brief liaison with Brother Frank who disappeared shortly after and she forever yearned for him as her own marriage travelled the rocky path that most encounter at some time, desperate for the thing she couldn’t have. One of the bedrooms in the house just doesn’t feel right to Julia, Rory and a cut hand bring blood into the room. Julia sees something and the blood vanishes as if consumed, is Frank still here. Realization hits her, she’d been in love with him all along and if it takes blood to restore him, then blood she will supply, and not think twice of the consequences.

‘It was human, she saw, or had been. But the body had been ripped apart and sewn together again with most of its pieces either missing or twisted and blackened as if in a furnace. There was an eye, gleaming at her, and the ladder of a spine, the vertebrae stripped of muscle; a few unrecognizable fragments of anatomy. That was it.’

Rory and Kirsty are caught up in the insanity and ferocity, unwitting ingredients in a mixture of blood and violence, and it all comes back to Lemarchand’s box.

The Hellbound Heart for horror fans is not a million miles away from being the perfect read, the concept of access to another plain of existence is a well-used one and Clive Barker handles it with vivid poise. The Cenobites and the story of Lemarchand’s box are the most outlandish parts of the story but the prose and vision that the author portrays make it feel real and not beyond all possibility. Characters are well rounded and there’s enough horror to disturb most. Now I’m off to watch the film, again.