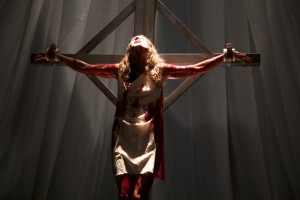 Even before audiences had even seen the Martyrs remake there was a big hoo-ha as the mere thought of anyone meddling with what many consider a masterpiece was disquieting, to say the very least. Now, even after many have seen it at festivals and on VOD, general opinion remains along that same despondent line of thinking. And that, to me, is a real shame.

A lot of the criticisms dispute that the film is just plain unfaithful to the original and that the violence was so, so lacking. Yet these opinions are put forward just when virtually everyone and anyone is complaining that the Cabin Fever remake is a snoozefest simply because it treads the exact same path as the original, sans Eli Roth’s charm and comedy.

Mark L. Smith’s adaptation of Pascal Laugier’s original script might not be perfect but it shouldn’t be written off so swiftly as his intention was never to create a by the numbers retread but rather wanted to take audiences on a different, more character based, ride, and that’s exactly what he achieved.

With the film now released in the US and all set to screen at this year’s Film4 FrightFest strand of The Glasgow Film Festival, SCREAM caught up with Kevin and Michael Goetz to talk about the film and to shed a bit of light for the naysayers on the why and wherefore of this alternate take on Laugier’s much-lauded classic…

SCREAM: Daniel Stamm was originally on board to direct the remake but pulled out due to budgetary reasons. Where and how did you come into the fold?

Kevin Goetz: We’d finished our first film, Scenic Route, with Josh Duhamel and Dan Fogler, which is kind of a psychological thriller about these two guys in the desert for the entire duration of the film. Peter Safran called us in for a meeting, as he’d really enjoyed that film, and he told us that he had another one. He told us it was really low budget but that the writer, Mark L. Smith, who had just written The Revenant, had come up with a great script and if we wanted to do it then it was ours. He also thought we could get a pretty decent cast onboard.

We hadn’t really heard about the original movie. Well, we had, but we hadn’t actually seen it, so we read the script first and then we watched the movie each once. That was pretty much it. We had to take that original film and put it out of our minds and then we focused on the script that we really liked because of the relationship between these two women and how far they were willing to go for each other to the very end. That excited us and it was kind of similar to Scenic Route where there was these two guys and the dynamics between their relationship, so it seemed like kind of a natural progression for us – to make more of a psychological thriller. It wasn’t like ghosts and demons, even though Lucy has her demons, but that’s just her mind.

We liked the psychological aspect of this film in that it’s real and this kind of thing could, and does, happen all the time where people are kept in rooms. That’s much scarier to us than any of these goblin things and stuff that’s out there. So, for those two reasons we were interested in taking this project on: a good script with good character development and two characters that were really strong and had great arcs, and making a psychological horror film, so we jumped on board.

SCREAM: We have to talk about the elephant in this room as a lot of people are saying Martyrs should never have been remade and that your version is a much tamer version that doesn’t hold up to the original.

Kevin Goetz: Yeah. I mean, we watched the original and there’s a 25 minute scene of a girl getting tortured. The original film was going for that; that’s what that movie was doing: How far can it push people to stay in their seats? And frankly, a lot of people left their seats and some countries didn’t even allow the movie to be shown.

We’re not interested in that! We’re interested in good storytelling and the good story that was Martyrs in Pascal’s story is an amazing story, but for so many people, including us, it’s too difficult to watch and it’s not like Goetz brothers got the script and thought, “Right, we’re gonna tone down all the violence.” We got a script that was less violent than that – that’s just what the script was. We didn’t work on detailed notes with Mark L. Smith, it was more like, this was the script and let’s go with it guys.

We had a couple of showings at different festivals and we’ve seen people that had to cover their eyes in ours often and some people walked out. Some of our friends told us that it was just way too intense for them. So yeah, the original is a niche market of people that are after that really extreme horror but this was never going to be that and we know we’re going to take a lot of flack for it. We know it, but we couldn’t go to that extreme. This had to be accessible for people.

And also, when you have 5,000 dollars you don’t quite have the money to splatter blood as much as you want and you have to become creative in ways to get some of those things we did on such a limited budget and 16 days of shooting.

SCREAM: As you said, the relationship between the two girls serves a much more important purpose in your version. How involved were you in the casting process, especially when it came to selecting Troian Bellisario and Bailey Noble?

Michael Goetz: We were very involved and we knew, coming into the project, that that was going to be the biggest challenge: casting two women who were going to take on these roles and roll up their sleeves and give us everything. It was a sixteen day shoot, like Kev said, and every single minute of those sixteen days these girls are either being tortured, chased or emoting some crazy psychological torture they went through when they were children. They really had a lot to do every second of the day and they both brought it. From the moment we saw them in casting we put them together in a chemistry reading and we loved the energy between them. We loved Troian’s strength and we loved Bailey and how she was a sort of delicate flower and how her kick-assness had to come out and we loved seeing that happen. So we knew they were right for the roles and we were really happy that they were available and we were able to have them for the project.

SCREAM: Troian absolutely nails her tormented performance. What did she draw from to really tap into Lucie’s mindset?

Michael Goetz: Troian is amazing. She went through some kind of trauma in her teen years that we had read about. She also mentioned it at a couple of festivals about how she tapped into a bit of that and she was so committed to this. She really wanted to show this strong woman in the film as she thinks it’s something that’s really lacking in the movies and she was very excited to take this on. We kept the sets minimal when she was getting into her emotional state and let her have her space. Sometimes it would take her time to work up to that but she would always, always get there.

SCREAM: I know you intended to shoot Midnight in Ohio next. Is that still your plan or has something else taken its place?

Kevin Goetz: A real passion project we’ve been working on for three years finally got funded so we’re tackling that first. It’s called The Violent Separation of Flesh and Blood. It sounds like a horror film but it’s more of a thriller. It takes place in 1980s Montana and it’s about two brothers; one who commits a murder by mistake, and the other brother helps him cover it up. That’s the first 25 pages, and then the rest is about them unravelling from all the lies in this small town. It’s an amazing, amazing script and we’re hoping to shoot that in Canada, coming up in April/May. 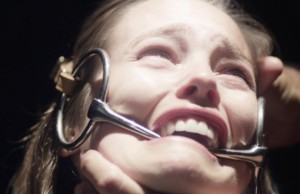 We’d like to thank the Goetz brothers for chatting to SCREAM. Martyrs is available in the US now and will be screening at Film4 FrightFest at the end of this month. In the meanwhile, we’ll leave you with a trailer: