THE GOD OF THE RAZOR: Book Review 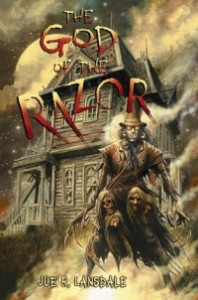 The God of the Razor is a collection of short stories by Joe Lansdale published by Subterranean press, bringing together all but one of his tales about the demonic entity from another dimension, the God of the Razor.

The first story is the chilling centrepiece and the one that started it all, Nightrunners is without doubt a classic in the horror genre and if you’re into horror then you need to read this. Joe Lansdale is an audacious storyteller and this is by far the darkest of his stories that I’ve read, and in retrospect it’s also by far the best.

We start with violence as a police officer pulls over a group of kids speeding in a black ’66 Chevy, they’re heading toward a particularly evil revenge mission and nothing will get in their way, not even the law.

Montgomery and Becky Jones are staying at a house by the lake outside Minnanette, a seemingly futile attempt at getting past the harrowing rape ordeal that Becky recently suffered at the hands of a young gang of killers. Clyde Edson was the rapist caught at the scene of the crime, who later hung himself in prison but his part in this story isn’t over by a long shot courtesy of the God of the Razor. The black ’66 Chevy is full of Clyde’s gang, armed and just a little fucking dangerous, and they know where Becky Jones and her husband are holed up. And they are going for revenge.

So the story starts somewhere near the end and we then go back in time for an intimate look at all the characters, their stories and how everyone ended up in their current predicaments. Switching from past to present as the story progresses through outrage to outright atrocity and of course some sheer brutality along the way. A tale of violence, fatalities a plenty, and something else, something not of this world. Something that comes in nightmares, when darkness sets in and then finally bleeds back into reality with devastating consequences.

Of the six short stories King of Shadows was my favourite, a dark story about a young boy who goes to live with another family after his Father kills his Mother then slits his own throat with a razor. Death and sharp implements follow this boy, along with someone who wears the heads of his victims like shoes.

Unfortunately this collection is only available if you get the book and it is certainly well worth obtaining along with the fabulous artwork inside. You can however get Nightrunners on kindle and it gets my highest recommendation.