THE EYE THAT BINDS: Book Review 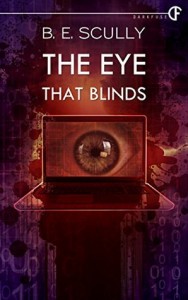 The eye that blinds by B E Scully is a wonderfully tortuous and turbulent little novella. If you’ve ever considered stalking as a profession then there’s plenty of tips here on how to take it to the next level, although on a serious note that’s not an endorsement you should take to heart.

Ross Delvin, better known as Mad Dog, in his own mind anyway, finds himself stood naked on one leg in his living room and bang on 3 hours later, he’s still there and completing what he believes is a bizarre task.

The twenty-seven year old college graduate, currently unemployed and star contestant of the soon-to-be-aired reality TV show ‘The Eye’ has it all in front of him. The only question, is it genuine or is someone pushing his buttons in a rather disturbing game. Well he believes his life is about to change, he receives various tasks via email and fame is an enticing prospect for this troubled mind.

His two best friends, one his now ex-girlfriend and the other his best mate, who appears on the surface to be normal and extremely successful. Both however are far from normal, in fact all three of them are damaged goods, Ross’s best buddy Tyler Wickett has always loved Brooke Merrill but she chose Ross instead and he’s fixing to change all that. Brooke has convinced herself she’s got MS and Tyler’s using this as his angle. Each finds answers to their obsessions on the internet, manipulation, surveillance, superficial desire for the spotlight and a fairly severe case of hypochondria.

Three more psychologically damaged people you’re unlikely to meet again and it’s intriguing to see this love triangle spiral out of control amidst the delusional pursuits of deception and carnage. The story just flowed seamlessly, the characters were convincing and the pace spot on from an author well worth checking out.