The Expendables for Horror Fans is Happening! 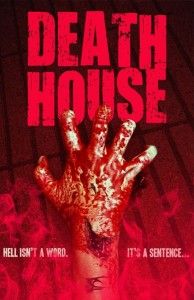 The epic and detailed synopsis is as follows:  The Death House is the Area 51 of Evil… a subterranean government facility that holds humanity’s worst on nine levels. Hell, Dante’s ninth level, holds the Five Evils… the “dark stars” of Death House. These individuals are so heinous they can never walk among society again. They may also be supernatural. Agents Toria Boon and Jae Novak have their own dark pasts, arriving at Death House to tour its levels and observe its denizens first-hand as well as the medical and mental experiments of Drs. Eileen Fletcher and Karen Redmane. Their depraved experiments date back to the Nazi doctors of WWII. Prison cells are virtual reality holo decks that recreate prisoner environments before they were incarcerated. A special hallucinogenic gas keeps inmates under control. The victims are homeless, bused into Death House to play literal victims while killing habits are studied. The results are sick, but only a hint of what goes on here. Hell literally breaks loose inside the facility when an EMP device detonates, killing all power and communication and… releasing every prisoner. Boon, Novak, and Fletcher are caught in a race against advancing prisoner hordes led by occultist Neo-Nazi Sieg. The monsters are freed, and they’re going down. Boon and Novak’s fight through Death House turns into a house of horrors gauntlet; their only hope of escape is descending into Hell and enlisting the help of the Five Evils. Events culminate in a violent face-to-face stand-off with absolute evil… only to find that they have travelled down a rabbit hole and through a looking glass. Black is white and white is black and the definitions of good and evil no longer apply. Who are the monsters? Who will escape?

Does that sound perfect, or what!?

Sadly but unsurprisingly, the death of Gunnar Hansen slowed down the production of the film, but it has a release date slated for 2017. Harrison Smith (Zombie Killers: Elephant’s Graveyard) is directing the film and he has described the film as a mix of Assault on Precinct 13, Jurassic Park, Saw, Resident Evil and The Wizard of Oz. That’s one hell of an eclectic mix.