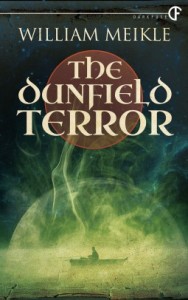 The Dunfield Terror is apparently a ‘Lovecraftian horror’ from Scottish author William Meikle, not being well versed in Lovecraft I can’t comment on that but this most certainly has Fog, strange monsters and impending doom in abundance.

Set over several timelines in Canada, the first in the present where Frank is part of the crew that keep the roads clear when the snow hits and it’s not just the snow that hits tonight. A mysterious glowing fog arrives, not for the first time and more commonly known in the area as the ‘fucker’. First chapter this ‘fucker’ makes a bit of a mess of Frank’s rather large snow plough and it’s certainly not what you’d call a natural occurrence.

Pretty soon this fog is wreaking havoc in the quaint little port of Dunfield.

‘When I opened my eyes, there was nothing to see but debris in the water …and a tendril of fog, almost luminescent, stretching ever closer to our own lifeboat.’

The second main timeline via a journal is back in the 1950’s and told in first person as is the present timeline. Duncan Campbell a mammalian biologist is part of a scientific experiment that sets out to make a battleship invisible, they achieve far more than that and the repercussions are devastatingly horrific.

The First person point of view method of telling the story didn’t entirely sit neatly with me, I didn’t feel the characters, didn’t get inside them and wasn’t completely gripped, not until the end anyway. I thought it more an intricate description of the events happening from the various characters viewpoints than a in-depth look at the personnel involved. Which wasn’t a bad thing, character development was lacking somewhat but the story more than made up for it, and the last part was exceptional from a tension filled horror angle. As creature feature horrors go this was pretty good and that harbinger of death the ‘fucker’ was a mighty efficient weapon but far from controllable.