After plunging audiences into fear on the international festival circuit The Drownsman has just been snapped up by AnchorBay for US, UK and Australia/New Zealand distribution.

Under the adept direction of Chad Archibald, The Drownsman tells the dark tale of Madison who, after almost drowning in a lake, develops an emotionally crippling case of hydrophobia. As her fears heighten and visions of a dark figure begin to torment her, four friends attempt an unconventional intervention. Rather than solving the problem, they make matters much worse by accidentally opening a floodgate and the dark figure takes this opportunity to drag them all to a horrifying place.

Co-written by Archibald and Cody Calahan, the film stars Michelle Mylett (Antisocial, The Strain) as Madison and Ry Barrett (AntiSocial) as the dreaded Drownsman.

No release date has been confirmed just yet but for now we’ll leave you with a trailer. We also have an exclusive interview with Chad Archibald in the latest issue of SCREAM which is out next week and look below for a teaser from the magazine interview. 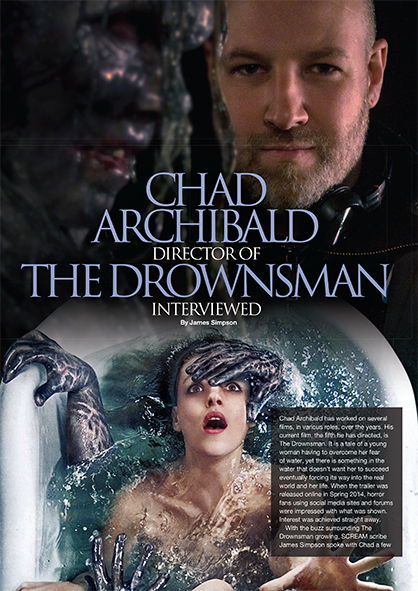