The Descent’s Shauna MacDonald in First Still from P.O.V. 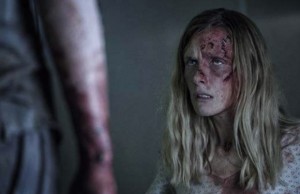 The first image has appeared from upcoming horror P.O.V., showing a battered and bloodied Shauna MacDonald. A genre favourite since her role in Neil Marshall’s The Descent (and its passable but unnecessary sequel), MacDonald also starred in 2008’s Mutant Chronicles and Paul Hyett’s 2015 creature feature Howl. In P.O.V., she plays the lead role of Dana.

P.O.V. is the feature debut of director Dennis Bartok, who wrote 2006’s anthology Trapped Ashes, a film that attracted genre royalty in directors Joe Dante, Sean S. Cunningham and the late, truly great, Ken Russell. The film, which was shot in Ireland and elsewhere around the UK, is heading to the European Film Market in Berlin later this month.

Synopsis:
P.O.V follows the story of Dana Milgrom, a track coach who, having survived a near-death car accident, finds herself completely paralysed and trapped inside her own body. While recovering, she becomes convinced that an evil presence exists inside her hospital room and is intent on killing her – and she may not be the only target.

Alongside MacDonald, the film also stars Steve Wall (TV’s Vikings) and Newcastle’s finest, Ross Noble. The comedian has of course ventured into bloody horror territory previously, having starred as the titular reanimated clown in 2012’s awesome Stitches. Brendan McCarthy and John McDonnell of Ireland’s horror specialists Fantastic Films are producing, along with Herman Slagter and Jan Doense of The Netherlands-based House of Netherhorror.