THE DARK AND THE WICKED: FILM REVIEW [FANTASIA]

Synopsis:
On a secluded farm, a man is slowly dying. Bedridden and fighting through his final breaths, his wife is slowly succumbing to overwhelming grief. To help their mother and say goodbye to their father, siblings Louise (Marin Ireland) and Michael (Michael Abbott Jr.) return to their family farm. It doesn’t take long for them to see that something’s wrong with mom, though—something more than her heavy sorrow. Gradually, as their own grief mounts, Louise and Michael begin suffering from a darkness similar to their mother’s, marked by waking nightmares and a growing sense that something evil is taking over their family. 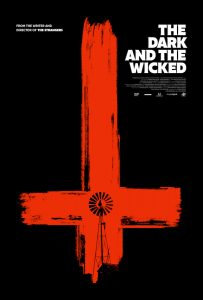 Occasionally, a horror movie comes along that’s so saturated with dread it leaves you breathless. The Dark and the Wicked is one such movie, trapping viewers in a desperate situation along with its protagonists as it subjects us to chest-clenching tension and claustrophobic scares.

Bryan Bertino, the film’s writer and director, broke onto the horror scene in 2008 with The Strangers. I’ll admit I’m in the minority that doesn’t particularly like that film, and The Dark and the Wicked does occasionally stray into the type of territory that turned me off about his debut, with spooky figures appearing behind people solely for the audience’s benefit, never being seen by the characters despite setting out to scare them. But for the most part, the movie shows off just how much Bertino has grown as a filmmaker in the intervening years, perfecting the art of atmosphere while still maintaining his ruthless edge.

The film begins deceptively simply, with furniture moving and doors opening on their own, suggesting we’re in for a straightforward haunting. It doesn’t take long, however, for the situation to escalate uncontrollably, revealing a much more oppressive and dangerous force in and around the house. While movies in this particular sub-genre can often grow stale after the first few frights, Bertino manages to keep the proceedings remarkably unpredictable, leaving viewers constantly on edge and unable to trust anything we’re shown. There is no help, there is no comfort. There’s nothing to do but watch.

The feeling of helplessness Bertino conjures perfectly mirrors the emotional trauma at the heart of the film as a brother and sister look on while their father slowly dies. Anyone who has been in this situation with a loved one knows how powerless it makes you feel, and the aching grief of the protagonists only heightens the suffocating dread permeating every frame. It’s almost a relief when something overtly frightening happens, because at least it provides a momentary distraction from the unending misery and nerve-jangling tension that oozes from the film’s pores. 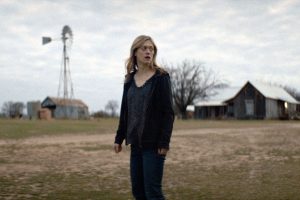 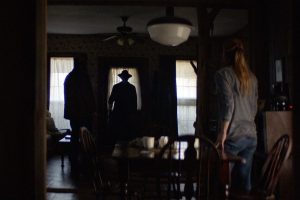 Ireland and Abbott Jr. are superb as the unfortunate siblings, conveying a lot of history and baggage with few words said. Julie Oliver-Touchstone also gives a great performance as their mother, her exhausted body language and haunted eyes quickly clueing us in to how much has already happened before the children arrived. A brief but incredibly memorable appearance from Candyman’s Xander Berkeley results in some of the film’s best scares, while further serving to establish that the lifelines we’ve come to expect in horror movies can’t save us now.

An exercise in terror, The Dark and the Wicked will make you think twice before turning the light out at night. It’s upsetting and unrelenting, just like the best horror films are.