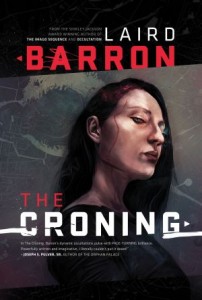 The story starts with an anecdote on the Rumpelstiltskin fairy tale, telling the events that inspired the child friendly fable but this version lacks any semblance of a happy ending. In fact an altogether darker affair that develops into a tale that easily and scarily broaches modern day times and I was definitely hooked by the events of the first section.

The stories main protagonist is the geologist Donald Miller and present day he is retired, through different stages of his life the story focuses on his relationship with his enigmatic wife Michelle, his children and various cultured friends that his wife mixes with over the course of her career as an anthropologist. Donald repeatedly encounters something dark, bestial and maleficent from the outset and although perturbed by an almost deliberate forgetfulness there is an undoubted connection with the thing that means the most to him, his wife.

The story moves at an unhurried pace entwining present day with past and the connections made as events revealed in the past bring light to the present are very well written. The Croning is an initiation, a ritual, a rite of passage with maidenhood and fertility giving over to wisdom, this Croning is touched on both in the times of the fairy tale and present day but this is only the tip of the iceberg as the apprehension grows.

The prose is excellent and it is certainly an intelligent story but where it suffers is a tendency to be simply over descriptive regarding characters and the stories they tell that have minimal impact overall. For example Donald’s son Kurt tells an after lunch ghost story from his teenage years that goes on for 10 pages and there are other similar instances that left me thinking that this could have been cut down to intensify the momentum instead of skipping over parts or wishing I’d skipped.

As horror goes this is good, genuinely creepy and disturbing, I wouldn’t hesitate to recommend it and will check out some more of Laird Barron’s work in the future.