The Conjuring 3 Will Haunt Theatres in September 2020

Details out of CinemaCon in Las Vegas reveal the official release date for The Conjuring 3. The film will arrive in theatres on September 11th, 2020.

Michael Chaves is helming this entry in the franchise, which stars Patrick Wilson and Vera Farmiga as paranormal investigators Ed and Lorraine Warren. Chaves also directed the upcoming The Curse of La Llorona, which takes place in the Conjuring universe. James Wan, who directed the first two films, will return as a producer. 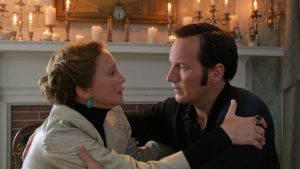 Rumour has it that The Conjuring 3 will centre around a murder trial in which the accused man claims he was possessed by a demon. There have been plenty of real-life cases featuring this sort of claim (like the story of Englishman Michael Taylor from 1974), though it’s not yet clear whether this entry in the franchise is inspired by supposedly true events.