After a slew of disappointing (and sometimes outright insulting) exorcism horror movies flooded the market a few years back, it takes a lot to make viewers take notice of the old head-spinning, pea soup-vomiting, “Your mother darns socks in Hell” routine these days. The Cleansing Hour almost manages to pull off this challenging feat, though it slumps back into mediocrity before the end credits roll. 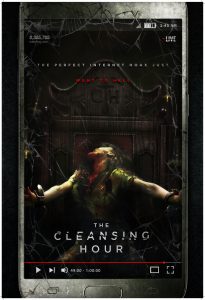 Co-written by Aaron Horwitz and Damien LeVeck (the latter of whom also directed the film), The Cleansing Hour is an adaptation of their 2016 short film of the same name. The plot follows Father Max (Ryan Guzman), the host of the smash-hit webcast “The Cleansing Hour” in which he supposedly performs live exorcisms between shilling merch. Behind the scenes is Max’s best friend Drew (Kyle Gallner), who asks his girlfriend Lane (Alix Angelis) to step in at short notice when one of the actors for their next exorcism is a no-show. But as the show goes live, Max and Drew realize that this episode is going to be a little different. Lane isn’t acting—and if Max can’t practice what he preaches, none of them are getting out of there alive.

The Cleansing Hour owes a lot to Grave Encounters, which used essentially the same premise to much greater effect. What The Cleansing Hour adds is the element of a live audience, and while this ups the ante, you will have to shut your brain off to believe that hundreds of thousands (and, later, millions) of people actually watch the show.

It’s a silly premise, but the film doesn’t take itself too seriously, which is both a blessing and a curse. While the humour sometimes works (like viewers commenting that Max should take his clothes off), at times, the tone feels dangerously unbalanced. This is especially true at the very end, which tries to jam a comedic moment involving Twitter validation in the midst of the devastation the demon has wreaked. This weakens the not-exactly-surprising twist that could have carried a lot more weight, but as it is, it feels a tad unnecessary and even rushed.

The best part of the film by far, though, is the practical effects, which unfortunately start to peter out in favour of some truly woeful CGI toward the end. In early scenes, we get to see how the show’s crew make the exorcisms look real, which is something any horror fan can get behind. This makes the initial confusion around Lane’s behaviour even more believable, because the demon’s powers could easily be mistaken for some great effects work. 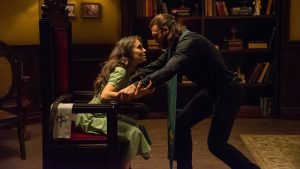 The acting is largely solid, with Guzman and Gallner playing off one another well. Angelis is clearly having fun, but she’s saddled with some cringey dialogue from a demon that wants to comment on internet culture while relying on a playbook better left on VHS. For all the promise of the premise, there really isn’t much new here. It’s worth a watch when it hits Shudder in 2020, but The Cleansing Hour is unlikely to amass the devoted fans that its central show achieves.