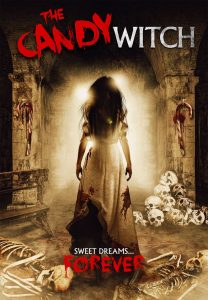 Synopsis:
A pair of ghost hunters are hired by a wealthy family to banish the violent entity that’s tormenting them. The spirit of the family’s former nanny, who mysteriously disappeared after rumours spread that she was abusing the children, this entity is known locally as the Candy Witch because she used to give treats to the local kids. But as the ghost hunters dig deeper into the case, they discover the truth is even more disturbing than the legend.

Based solely on the poster, you’d be forgiven for thinking that The Candy Witch is another of the cheaply (and often lazily) made haunting-based horror movies that make their way into bargain bins every year. But scratch beneath the sugar-glazed surface and you’ll discover a surprisingly engaging and atmospheric film that’s crammed with creative kills.

Directed by Rebecca Matthews from a script by Scott Jeffrey, The Candy Witch opens on a creepy little scene of Ruth (Heather Jackson), the family matriarch, encountering the spirit that’s haunting her home. Despite a poorly timed jump-scare that will leave you rolling your eyes—especially considering Ruth’s lacklustre reaction—the scene helps set the tone for the film to follow with the discovery of a box of maggot-filled chocolates. Yum.

The Candy Witch certainly doesn’t squander the opportunity to deliver a candy-coated slaughter. The titular entity (played by Kate Lush) racks up an impressive body count, using everything from a sharpened candy cane and a liquorice rope to cookie cutters and even cotton candy to dispatch her victims. The weakest kill occurs early in the film when the Candy Witch drowns a character we haven’t met before in a pan of chocolate that, for some reason, the woman was melting late at night. We later learn through some clunky exposition that this was the family’s neighbour, but the scene feels like it was added just to get the film to 90 minutes. Luckily, the Witch soon gets back to doing what she does best, and that’s terrorising a family that may not be as innocent as they initially appear.

A clever midpoint twist elevates The Candy Witch beyond your typical “banish the evil entity” fare, though the big villain speech leading into the climax gets a little convoluted. Lush brings a lot of empathy to her role, particularly during some smartly used flashback sequences, and Jon Callaway’s sensitive psychic Reece adds another layer of heart. Some impressive sets and lighting make the film an attractive watch, and while there are a few sound issues and a distractingly mixed bag of accents, the score is appropriately creepy.

The Candy Witch is a touch half-baked in places, but it won’t leave a bitter taste in your mouth. Check it out for the memorable villain and commitment to a theme, but don’t expect every interesting plot thread the film teases to come together in a satisfying way.