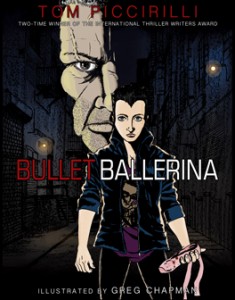 The Bullet Ballerina is a tongue in cheek tale of revenge that fritters between hard boiled noir, black humour and spleen puncturing ballet.

The Good.
Until her toe was injured, Ellie was a sixteen year old ballet student with the world in front of her, she begs Johnny Booze not to kill JoJo “the Ganooch” Ganucci because she’s desperate to do it herself. The bruised toe ruined her life, she lost her job, her boyfriend and was kicked out of her ballet lessons for being late. Revenge is sweet, so they say but is there enough bullets for this ballerina.

The Bad.
JoJo “the Ganooch” Ganucci is an Italian mafia boss, walking the street he accidentally stands on a young girls toe in a near head on collision. A catastrophic injury that the young girl will seek the ultimate revenge for, a bruised toe will do that. 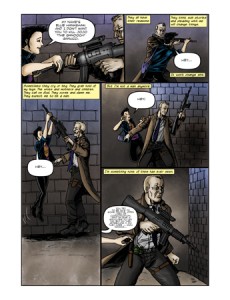 The Ugly.
Johnny Booze is a grizzled Iraqi War veteran and ex-cop who came off on the wrong side of some mobsters and the repercussions got his family blown away. Now he’s a shadow on the street, a killer who fancies himself judge, jury, and executioner. And to cap it all he has to dissuade a young girl from becoming a killer and he’s hardly the best example, especially when she takes his knife and sticks it in his chest.

Some funny moments, some good artwork but I could never get over how wrong our bullet ballerina looked, more like a boyish punk than a petite ballet dancer, after the story there is a couple of pictures of proposed looks for Ellie and both in my opinion were far better than the one used. That said apart from that I enjoyed The Bullet Ballerina and it’s a beautifully presented story by the late Tom Piccirilli with artwork by Greg Chapman.