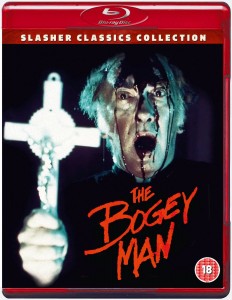 Synopsis:
When a couple of young children are involved in the death of their mother’s boyfriend, their lives are altered forever. Willy is scared in to silence and never speaks after the incident and Lacey is racked with such strong feelings of guilt that she must see a psychiatrist.

This original ’80s video nasty slasher, receives a great transfer on to blu-ray in this release from 88 Films. The picture is sharp and the sound is perfect, so fans of the film should be delighted. For those who are seeing this for the first time will be less impressed, as The Bogey Man is a very clunky, outdated horror and paints women in an awful light. Originally released just 2 years after Halloween, The Bogey Man tries relentlessly to capture the feelings of dread, horror and tension that John Carpenter’s classic was able to master. Sadly for The Bogey Man, he is just not able to mirror Halloween’s effectiveness and is just a mere imitation of a far greater film. It adopts the Carpenter-esque synthy score, but it feels desperate and out of place, simply used to encourage us to that it is on a similar level of horror greatness. There are plenty of films from the ’80s – and before – that are wonderful to watch today and this is not one of them. It suffers from largely from poor editing; many scenes are too long and others cut at awkward moments. There is a lot of uncomfortable dialogue delivered by a mostly wooden cast and, at times, I felt myself embarrassed for those on screen.

There are a few scary moments and the opening scene is definitely the most shocking; as a young Willy and Lacey spy on their mother as she ‘entertains’ her gentleman – including putting a stocking over his head, weird – causing them to be punished. Willy is tied up in his bed, so the lovers can get down to business without being disturbed. However, little Lacey is soon to the rescue as she cuts her brother free with a knife, places it in his hand and watches him stab the boyfriend to death through a mirror’s reflection. The contrasting use of silence and synth-soaked sound is used well to create an air of reality versus cinematic horror. However, The Bogey Man never tries to persuade us that what we’re seeing is truly real and relies on spectacle as much as it does normality. The film’s manipulation of light is particularly noteworthy, creating quite beautiful and visually striking scenes; especially during these opening moments. Nonetheless, this story is rooted in a certain amount of truth and covers very real themes that involve parenthood, loss and guilt. There are some good moments where tension is steadily built and a heart-beat sound effect helps further the suspense. The Bogey Man does have a certain amount of charm to it; its poor special effects and clumsy editing are difficult to muster, but we must remember that was the norm back in the day. Horror has come a long way since 1980 and, understandably, the frequent use of harsh zooming in and melodramatic screaming may require some perseverance from some audiences if they wish to get through to the end.

Lacey’s feelings of guilt are at the forefront and it would be right to say that her story is at the film’s centre. Unfortunately, this is where it all goes downhill for me. Putting aside the film’s attractive exterior, deep within this film’s core is an unforgivable and wretched portrayal of women. The first female character we are introduced to is a mother and a terrible one at that. Her young children are left outside at night and have nothing to do, but stare as their mother seduces a man. Cut to the next scene and she’s drinking whiskey from the bottle, laughing as her boyfriend ties up her son. This is all within 5 minutes. Choosing the film to focus on Lacey’s guilt is a poor decision, what exactly does she have to feel guilty about? She is terrorised by waking nightmares, sees haunting images in mirrors and spends most of the film trying to persuade her loving husband she isn’t crazy, because she protected her brother. Bad woman! There is a scene where her clothes are literally ripped off by an unseen force, showing that she is nothing more than an object for a twisted, sexually-driven masculine ghost to play with. Of course, this view of women is outdated and it’s rare – but not unseen – for a modern horror film to portray woman so negatively, but for a woman in 2015, The Bogey Man’s portrayal of its female characters may leave a bad taste.

There is nothing outstanding or particularly memorable about The Bogey Man and it will probably drift from your memory soon after you’ve seen it. Perhaps it was too late for me to see it for the first time and get a hold on its enjoyability. But, I definitely know a good ’80s slasher when I see one, and this just does not cut it.

There’s a few extras to behold on The Bogey Man’s Blu-ray, including an insightful interview with director Ulli Lommel as he talks about filming in Maryland, what it was like on set and the initial, very successful release of the film in 1980. Additionally, there’s a few TV spots, the original trailer for the film and a stills gallery. There’s also a trailer reel for some other films coming soon from 88 Films, featuring Puppet Master and The Pit and the Pendulum. It’s nothing to get too excited about and a few deleted scenes or behind-the-scenes action would have been nice, but hey, let’s not get too greedy.