Sinister director Scott Derrickson has reteamed with co-writer Robert Cargill for The Black Phone—and the official poster is mighty creepy. 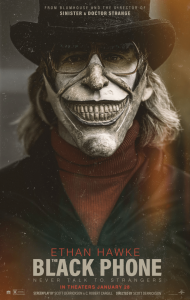 An adaptation of the Joe Hill short story of the same name, The Black Phone sees a 13-year-old boy abducted by a child killer and locked in a soundproof basement start receiving calls from the killer’s previous victims on a disconnected phone. Ethan Hawke (Sinister) plays sadistic killer “The Grabber,” featured on the poster.

James Ransone (It: Chapter Two), Jeremy Davies (Hannibal), Mason Thames, and Madeleine McGraw also star in the film, which is being produced by Derrickson, Cargill, and Jason Blum, with Joe Hill executive producing. The Black Phone is currently set to ring in theatres on January 28th, 2022.