The Beast is Coming in this Teaser Trailer for Damien 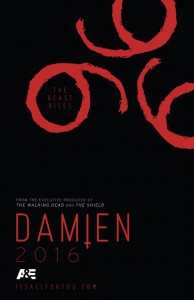 A teaser trailer has been released for A&E’s TV series Damien to get us ready for the show’s debut next year. We don’t have an exact release date, yet, but we do know that it will be in 2016. The show will consist of 10 episodes and will follow the adult life of The Omen’s devilish Damien.

Bradley James (Merlin, iZombie) will be playing Damien Thorne, with Barbara Hershey as Ann Rutledge. The show additionally stars Omid Abtahi, Meganlyn Echikunwoke and Scott Wilson. Shekhar Kapur will be making his TV directorial debut as he directs the first episode of Damien.

Have a look at the teaser trailer below and watch as Damien begins to realise exactly who he really is – the Antichrist, duh – and why his “father” would be so very proud of him.

Be sure to catch Damien when it airs in 2016, hopefully we will learn of an exact release date soon!