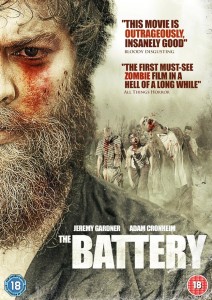 Synopsis:
Two former baseball players struggle to survive in a world ravaged by a zombie apocalypse.

Zombies; at this point in time, they’re gentrified. In recent years, the continuous barrage of films featuring the undead has been predictable, mediocre, and tiresome. A good amount of these works have tried so hard to produce a stunning image, that the story suffers a great deal in the long run. So many times we’re treated to a CGI generated horde that bear more of a resemblance to a group of lemmings, than something we should fear. The Battery is a film that has broken that chain of monotony. It’s also one of the greatest zombie films to emerge in years, and breathes new life into the genre.

Our story is centred on two former baseball players, and their daily struggles to stay alive in a post-apocalyptic world. Oddly enough, this is what sets this one apart from the herd of most modern zombie films. It’s about survival, not the apocalypse. It’s not about the horde; it’s about the people who have to exist on a day-to-day basis. In a lot of ways, this story harkens back to some of Romero’s early films. The zombies are a part of the story, to be more specific; they’re present to assist in the telling of the narrative. The underlying theme of this film is a commentary of how different people react in the face of a crisis. Our two ball players represent the two sides of the human brain: logic, and emotion. There’s a psychology here that you might not expect in a zombie flick. The fact that they’re ballplayers illustrates their need for one another in the ongoing struggle that lies ahead.

There’s a well-known saying: “Real horror is what you don’t see.” This film embraces that sentiment, and runs with it. We don’t see the apocalypse, we don’t see the breakdown of civilisation, and we’re thrown headlong into a world that’s in a perpetual state of disarray. There’s a lot of this story that’s implied, and not shown. Which is what a great deal of horror films lack in today’s environment.

The end result of what we are shown is nothing next to remarkable. Much of the visual aesthetic this film has a strong influence from Soviet filmmaker Andrei Tarkovsky. The camera is just as important in telling the story as the zombies and the action sequences.

This is the proverbial oasis in the desert if the now tired zombie sub genre.