Terror TV Call in the Bats to Advertise Nosferatu Screening

Canada’s only horror TV channel, Terror TV, has come up with a genius piece of promotion for their upcoming season of films. The channel are celebrating “The Origin of Film”, by playing host to a marathon of classic early horror films, including F.W. Murnau’s 1922 horror benchmark Nosferatu. The promotional gambit in question is a billboard poster that celebrates the night in style. 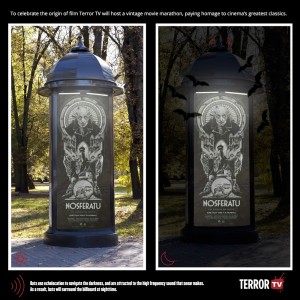 By day the standalone billboard, which was designed by Ontario advertising student Nicole Alchin, displays some pretty nice Nosferatu artwork, but is certainly nothing to get too excited over. It is but an advert, after all. As night falls however, the out-of-house advert reveals itself to be something far more artistically valid. Emitting sonar frequencies once the sun goes down, the installation is designed to attract the attention of nearby bats who create something of a vampiric atmosphere by flocking to the sound.

Just imagine taking an evening stroll and stumbling across Nosferatu’s illuminated visage, encircled by bats. It goes without saying that we are big fans of this kind of thing. Hopefully some videos of the ad in action will surface soon.