The Terrible Two Misbehaving on VOD in March 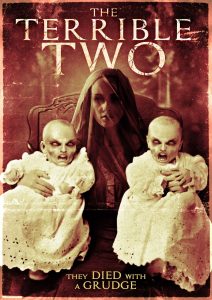 We all know what happens when someone dies with a grudge, and the results are expectedly ugly for a couple following the deaths of their daughters in The Terrible Two, which is coming to VOD this March from Uncork’d Entertainment.

“Albert and Rose Poe bought their dream house seven years ago in Greenfield, NC. They had no idea of the unspeakable horrors that took place in the house before they moved in. If they had known, then their children, Addi and Jade would still be alive. Instead the Poes now find themselves imprisoned in the house they thought was their safe place, and battling their two daughters for survival.”

Reid Doyle (who also produces) and Cari Moskow (One Tree Hill) star as the Poes, with Donny Boaz (13 Sins) and Devin McGee (Max Steel) co-starring. Billy Lewis wrote and directed the film, for which this trailer has recently been released.

The Terrible Two will be creeping onto VOD on March 6th.