The first clip is here from upcoming Ted Bundy bio Extremely Wicked, Shockingly Evil and Vile, and in it, Bundy is doing what he did best—failing to own up to his crimes. 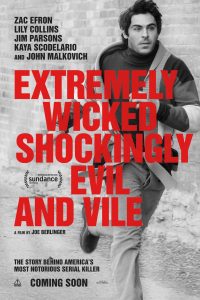 The notorious serial killer, played here by Zac Efron, was famous for trying to shift the blame, scapegoating everything from television to pornography to his own victims, once accusing them of inviting abuse by radiating vulnerability. This newly released clip shows him playing the victim, implying to his then-girlfriend Elizabeth Kloepfer (Lily Collins) that the police set him up.

Extremely Wicked, Shockingly Evil and Vile is directed by Joe Berlinger, who also helmed the Netflix documentary series Conversations with a Killer: The Ted Bundy Tapes. Netflix recently acquired the new film, seemingly going all-in on Ted Bundy content following a revival in fascination for the killer, who was executed by the state of Florida in 1989. Bundy eventually confessed to 30 murders, though the true extent of his crimes is unknown.

Netflix has yet a release date for the bio. In the UK, it will be released in theatres and on the Sky network on May 3rd.