Teaser Trailer for The Autopsy of Jane Doe; Who is She?

A teaser trailer has been unleashed for Andre Ovredal’s (Trollhunter) chiller The Autopsy of Jane Doe, which follows father and son coroners as they carry out an autopsy on an unidentified murder victim. The film will be Ovredal’s first English-language film and is his first feature since his monstrous Trollhunter from 2010. 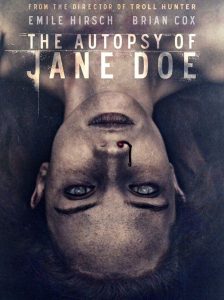 We loved Trollhunter and thought it was a solid, scary and impressive creature feature, so we’re intrigued to see what Ovredal delivers with something a little more supernatural. The script has been written by Once Upon a Time and Dead Summer scribe Ian B. Goldberg and Richard Naing.

Check out the short and sweet teaser trailer below that gives away very little of the plot and chooses to bombard viewers with skin-prickling tension and a few good old-fashioned jump scares. We think it looks promising so far, but we’re keen to see a little more.

The Autopsy of Jane Doe will screen at the London Film Festival on 13th October, the Chicago International Film Festival on 15th October and will be released in the USA on 21st December. It definitely looks like the perfect festive feature…