Teaser for You’re Gonna Die Tonight Has One Question 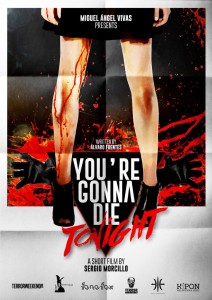 You’re Gonna Die Tonight is presented by Miguel Angel Vivas (Extinction) and has been written by Alvaro Fuentes, with an original idea by director Sergio Morcillo and Ismael de las Heras. When speaking about the film, Marcillo said, “You’re Gonna Die Tonight” is a real roller coaster of emotions […] A love letter to ’80s slasher and generally those B series productions that plagued the video stores. It has a remote history of conventional slasher to recreate a mature, complex and shocking conflict.”

So far, the short has screened at Madrid’s CortomaNia Short Film Festival, but keep an eye out for it to hit the international film circuit this year. You’re Gonna Die Tonight stars Mónica Aragón, Antonio Zancada, and Rafa Casette.