Synopsis:
Seemingly abandoned by society following the collapse of civilisation as we know it, two brothers (Frazer Alexander and Alfie Stewart) are forced to live by their wits in the wilds of a deserted Cornwall. Though the elder (Alexander) tries to retain some degree of humanity in his approach to survival, the younger (Stewart) reverts to cannibalism by attacking lone travellers and eating them in order to survive. It’s only when a girl called Molly (Jennie Eggleton) appears one day that the boys meet a female for the first time: an event which brings their base male instincts to the fore with cataclysmic and life changing affects for them all. 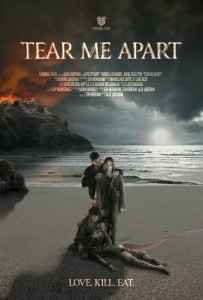 In the world of modern cinema the lines between horror, dramas and thrillers have become blurred, most likely in an attempt to appeal to a larger audience. In the 1930s and 1940s and through to the 1960s people who went to see a horror film, generally speaking, got what they wanted, horror. From the 1970s on however filmmakers began to promote a film’s crossover aspects – such as 1978’s Halloween and 1991’s The Silence of the Lambs – highlighting their elements which would appeal across several genres. Sometimes, of course, this worked. More-often-than-not however this attempt at broad appeal has ended up confusing and misleading, giving potential audiences the belief that they’re getting something which in the end they’re not. Disappointingly, it seems that Tear Me Apart falls into this camp.

Undoubtedly unsettling in many aspects, the film leaves you with the impression that it was afraid to go as far as it would have liked. Its ‘cannibal’ aspects – though there – are remarkably brief and sometimes only hinted at. This approach may be deliberate on the part of the filmmakers, in an attempt to dig deeper into the psychology of the main characters, and hence evoke sympathy from the viewer. In the end though, you can’t help but feel short changed: a few shots of Stewart’s character digging into a man’s arm with a knife and later eating what looks like a couple of strips of raw, salted beef, feel more like a sideline to the main story, and hardly justify it being called a ‘cannibalistic horror’ in modern film terms. As for the film’s real ‘horror’ aspects, these are again more inferred than physical: a post apocalyptic world, the fear of the unknown and being alone are all elements which form the background and basis for the film’s story to play out against, but more through an atmosphere of unease and disquiet than anything outright horrific.

There is much beauty to be found in the film: Wightman uses a rugged, breathtaking Cornish landscape to mesmeric effect as the setting for the action, whilst Eggleton (the best in a small cast) is a class act, bringing innocence and mature sexuality together in a beguiling mix. Even so these elements – particularly the romantic relationship between Eggleton, Alexander and Stewart – feels ultimately underdeveloped, a missed opportunity.

Here is a film which is clearly trying to be thought provoking and serious through its sense of ambiguity (the viewer is told none of the character’s real names, except for the girl Molly) and other worldliness, an aim which it achieves to a degree. The end product though proves more confusing than mystifying and, as a result, disappointing. Ultimately – though it undoubtedly makes an impact, both visually and psychologically – Tear Me Apart fails to be the groundbreaking alternative to your run-of-the-mill cannibalistic horror which it’s makers so clearly intended it to be.

Tear Me Apart, following its UK theatrical premiere at The Genesis, Whitechapel on the 16th of June 2016, was released online on June 17, 2016, and is available to buy or rent exclusively from www.tearmeapartmovie.com.