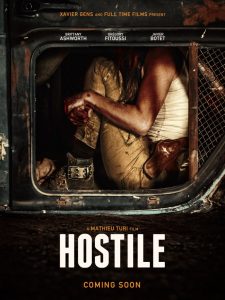 A new poster has been unveiled for Hostile, a post-apocalyptic thrill-ride from director Mathieu Turi that comes from producer Xavier Gens. You may recognise Gens as the director of Frontier(s) and the X segment from ABCs of Death. He’s one extreme film-maker and his involvement in Hostile only suggests that we can expect more bold and brutal French horror with this one, too.

Synopsis:
Juliette, a lone survivor of an apocalyptic era, fights to survive against hunger, thirst, a broken leg and strange disturbing creatures that only comes out at night-time.

Javier Botet makes up part of the cast and we certainly think he’s going to have something to do with the “strange disturbing creatures” that lurk in this hostile environment.

Hostile will be Turi’s directorial debut and it additionally stars Brittany Ashworth and Gregory Fitoussi.