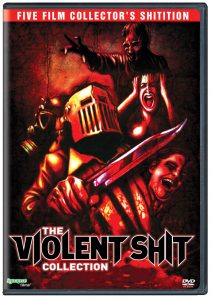 A notorious and much whispered-about title back in the underground VHS-trading days of the ‘90s, Andreas Schnaas’ no-budget, shot-on-video gore mini-epic Violent Shit set a bar that other DIY splatter filmmakers struggled to reach. The 1989 film marked the start of a trilogy – completed by 1992’s Violent Shit II: Mother Hold my Hand and ‘99’s Violent Shit III: Infantry of Doom – that was mostly watched on third or fourth generation tapes, and it was years before translated versions appeared, and English-speaking audiences could enjoy classic dialogue such as “This bullshitting job is fucking me to shits!”

If you’ve never seen the cult series, there couldn’t be a better time to dive in, with the release of Synapse Films’ upcoming DVD set, which features remastered versions of the original three films, plus 2010’s Violent Shit 4.0: Karl the Butcher vs. Axe. The first three films got successively more coherent and professional although the original, while painfully amateurish and horrible edited, remains brilliantly excessive and offensive, and is a perfect snapshot of an era when wannabe directors were pushing the limits of onscreen violence in their backyards. 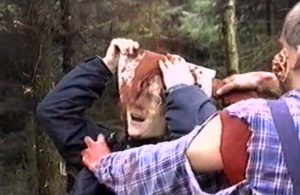 As well as the full saga of demented killer K. the Butcher Shitter and his psychotic offspring Karl the Butcher Jr., Synapse’s release also includes Schnaas’ 1991 film Zombie ’90: Extreme Pestilence. We also get behind-the-scenes footage on Karl the Butcher vs. Axe, plus a featurette on the film’s premiere, and liner notes from We Are Still Here director Ted Geoghegan, who began his career writing Schnaas’ Demonium (2001) and Nikos the Impaler (2003). 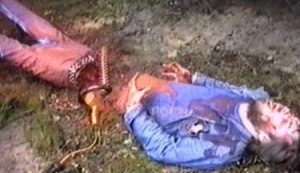 The Violent Shit Collection will be available unrated and region-free from April 11th.