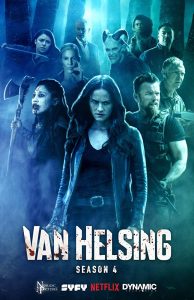 Ahead of the series four finale of Van Helsing, Syfy has officially renewed the show for a fifth season. Sadly, it will also be the last.

Centring around Vanessa Van Helsing (Kelly Overton), the daughter of the legendary vampire hunter, the series is set in a world overrun by vampires. With the help of a band of heroes, Vanessa must fight to take back what has been lost.

Production on the 13-episode final season is slated to begin early next year, with a 2020 premiere planned.