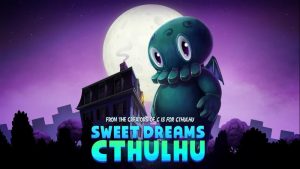 Nothing quiet brings the terror like HP Lovecraft’s most famous monster creation, Cthulhu. An indescribable terror of the outer dimensions, Cthulhu wanders the edges of our sanity waiting for us to peek just a bit too far beyond the veil, to a place where the trees twitch against the ebony sky and the pale monsters of our sins hide deep in the mountains. But not even his thousand tentacles and instant madness inducing visage can erase the fact that he’s just too damn cute! That’s right, even the prince of fear was once just a young and bumbly little monster. Sweet Dreams Cthulhu explores the creatures younger years in an early reader picture book where he learns that the scariest thing in the dark is himself. Handled by the team behind C is for Cthulhu, the newest addition to the Lovecraftian mythos does a lighter take on The Great Old One that aims to please even the youngest of horror fans.

The story is simple and straightforward, as expected of a kid’s book, and has Cthulhu visit his friend Howard Lovecraft after a series of nightmares. Howard explains that even though nightmares are scary and the shapes under your bed are creepy, they’re nothing more than the monsters imagination and that everyone gets scared once in a while. It’s a fun bedtime story for children who sleep with the hallway light on or for the imaginative youngster that enjoys creepy monsters in his tales. The art isn’t overly scary and adds a playful angle to Cthulhu, ensuring that it won’t keep your kid up with their own nightmares.

So with the very obvious selling point of the book being aimed at children, what has made its predecessor, C is for Cthulhu, and inevitably Sweet Dreams Cthulhu, so appealing to adults with no children? To be fair, if you have a kid, you’re going to get a lot more use out of this book; all-in-all, it’s a young reader book. Of course, if you’re one of those people that has to own EVERYTHING Cthulhu (you know who you are), this is a highly recommended addition. It’s a work that’s done with a lot of love and a lot of respect for the original and the creators, Jason Ciaramella and Greg Murphy, put a lot of work into it. It doesn’t feel like a cash grab or a ‘cashing in’ on a hot property, it’s got a pretty authentic vibe and respects the children and fans that would read it.

For adult readers, it’s the artwork that really sells the book. If you don’t have children and you don’t really care THAT much about Cthulhu, at least take a look at it for the art. It’s phenomenal! Greg Murphy has been in the monster illustration game for a long time and it really reflects his talent in this book. The colors are mimicked to look like hand painted pieces and wonderfully flow with the twilight setting of the book. The characters are rounded and child-like, much like Pixar character design, and move freely in the constraints of the pages. It’s a wonderful example of the potential of not only horror artwork, but children’s artwork, which, ever since there were children’s books, was a lot of folks’ first exposure to art and illustration.

While there is no release date for Sweet Dream Cthulhu, there is a Kickstarter that will be running all through May, though as of writing, most of the Kickstarter is already funded! That’s how excited fans are for this project. Check out the site here, and see what all the hub-bub is all about!