Suspiria remake brings the stars out 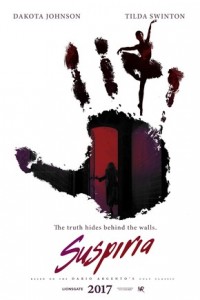 Things are, it seems, still moving with the long-rumoured remake of Dario Argento’s seminal horror masterpiece Suspiria. Things have been quiet for a while, but some big news has now been revealed by attached director Luca Guadagnino, and it makes the prospect of a Suspiria remake a little more palatable.

During an online Q & A, Italian director Guadagnino revealed that the project has bagged a couple of big names to star. The reliably awesome Tilda Swinton has signed up, as well as Dakota Johnson, now best known (for good or ill) for her starring role in last year’s 50 Shades of Grey. Swinton has a particularly exciting slate scheduled for the next year or so, following up her role in the Coen Brothers’ Hail, Caesar! with Marvel’s Doctor Strange and Joon Ho Bong’s (The Host) Okja, in which she stars alongside Jake Gyllenhaal and Paul Dano.

During the Q & A, Guadagnino also divulged that Suspiria will be set in Berlin in 1977, and that he hopes to get composer John Adams (Shutter Island, Birdman) to score the film. He also claims that Suspiria will be “the most Fassbinderian” of all his films. A poster for the film has appeared online, as if to accompany the casting news.

It could be good. It could be terrible. But with Tilda Swinton onboard, I’m (a little reluctantly) in.