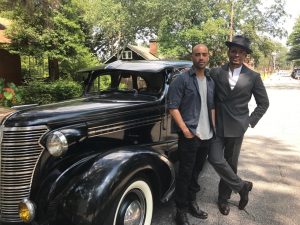 The series revolves around the Hastings family whom have owned the only funeral home and graveyard in La Rochelle for as long as anyone can recall. In addition to providing services for all faiths, the family specialty is handling “afterlife care” for the unexplained deaths of folks at the hands of demonic Infernals, and other unworldly phenomena that have long haunted the town. Over the years, the Hastings have developed a skill set in the dark arts to help combat this regular “Infernal problem” of La Rochelle. The family uses arcane weaponry, brute strength, mystical alchemy skills, and a deep knowledge of the occult and ancient lore from around the world to quell the evil within the shadows of the town.

“XLrator Media is proud to partner with SYFY, Netflix and Mario Van Peebles’ MVPTV on our first global television series. SUPERSTITION will showcase a brilliant cast of seasoned veterans and talented newcomers, and is created and produced by people who love and appreciate intelligent, well-crafted genre content,” said XLrator Media CEO Barry Gordon.

“This is a golden age for great television, and I look forward to doing some of the most creative, exciting and boundary-pushing work of my career,” said Mario Van Peebles.

ABOUT XLRATOR MEDIA, LLC
One of the fastest-growing independent film distribution companies in North America since its creation in 2010, XLrator Media, LLC (XLratorMedia.com) will release 25 films in 2017. Recent releases include Academy Award®-winner John Ridley’s Jimi: All is by My Side starring Andre Benjamin as rock legend Jimi Hendrix, CBGB starring Alan Rickman, and SXSW hits Housebound and The Diabolical. XLrator Media is the home of four acclaimed releasing labels: MACABRE for horror/genre (American Mary, Banshee Chapter), TURBO for action/thrillers (The Machine, Ironclad: Battle For Blood,), LIFEFRAME for documentaries (Storm Surfers 3D, Queen Mimi, It’s So Easy and Other Lies) and PACE for multicultural films (Five Star, Allegiance, We The Party).

From his first break acting alongside Clint Eastwood in Heartbreak Ridge to his portrayal of Malcolm X alongside Will Smith in Michael Mann’s Ali, Mario Van Peebles has charted a unique multi-hyphenate career as an actor, writer, director and producer. His film Baadasssss! about the making of his father’s Sweet Sweetback’s Baadasssss Song was one of Ebert and Roeper’s ten best films of 2004. He directed the multicultural western Posse and directed and produced Panther (written and produced by his father) about the Black Panther Party’s rise to power, which won the Locarno Film Festival’s Silver Leopard Award.

Mario Van Peebles brings decades of film experience to television, where he has directed dozens of shows such as “Roots,” “Bloodline,” “Hand of God,” “Sons of Anarchy,” “Empire,” “Lost,” “Boss,” “Being Mary Jane,” and others. SUPERSTITION is Van Peebles’ first foray into genre television as a co-creator/producer and marks the launch of his MVPTV production company.