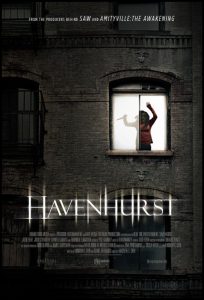 The supernatural horror Havenhurst is receiving a limited theatrical release, as well as a release on VOD and Digital HD on 10th February. The film comes from the producers of Saw and Amityville: The Awakening and follows a woman as she battles her inner demons while investigating the disappearance of her apartment’s last tenant.

Synopsis:
Jackie, a troubled young woman struggling with addiction, is released from rehab and given a second chance with a new job and a furnished apartment at Havenhurst. Guilt-ridden over the loss of her 8-year-old daughter, Jackie is quickly drawn into the mysteries of Havenhurst, in particular the disappearance of apartment 1006’s previous lost soul, a young woman she befriended in rehab who vanished without a trace.

Aided by a hardened New York police detective and a lonely foster child who lives under the sadistic shadow of her caretakers, Jackie must not only battle her inner demons… but the very real ones that live within the walls of Havenhurst.

The exploration of inner and outer demons is nothing new for horror films, but if Havenhurst can bring a refreshing a supernaturally appealing set of scares to the table, then we could be in for something exciting, sinister and spooky.

Havenhurst stars Danielle Harris, Fionnula Flannagan, Belle Shouse, Toby Huss, Josh Stamberg, Jennifer Blanc and Douglas Tait. You can watch the trailer below to experience some of the sinister goings-on at Havenhurst and its The Shining inspirations.