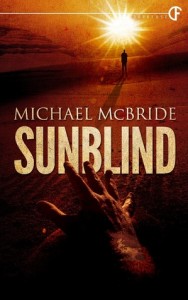 Sunblind is another thriller which skirts into psychological horror and with Michael McBride you just know you’re going to get a book that encompasses microscopic attention to detail and levels of research that are sometimes staggering. Sunblind gives us two protagonists the first and main character is Mayra Visari, who pays a large sum of money to join a group of illegals hoping to get across the Sonoran desert of Mexico and into America. Along with a coachload of other passengers they embark on an ill-fated trip that soon turns into a nightmare that threatens all their lives.

On the side of America we have border patrol agent Christian Rivera who comes into the story at the start of the book but at the end of Mayra’s journey as he discovers her barely alive by the roadside. He and a team of agents get medical assistance and start to backtrack her trail.

The chapters then advance with Mayra and her fellow travellers as they trek through the mountainous desert, stalked by an unknown assailant, killing the party one by one and Border Patrol Agent Rivera as he explores the path and the apparent violence of her fight for freedom. As both parties encounter something unbelievable, something that’s made its home in the mountains and only comes out to hunt.

The pace and tension that Michael McBride brings to the table are nail biting at times, knowing something is following you, something you can’t see and having nowhere to hide, no way of stopping the relentless slaughter, just puts you right in the thick of it. One of the best horror releases of 2014 by an author with an impressive list of chilling fiction.